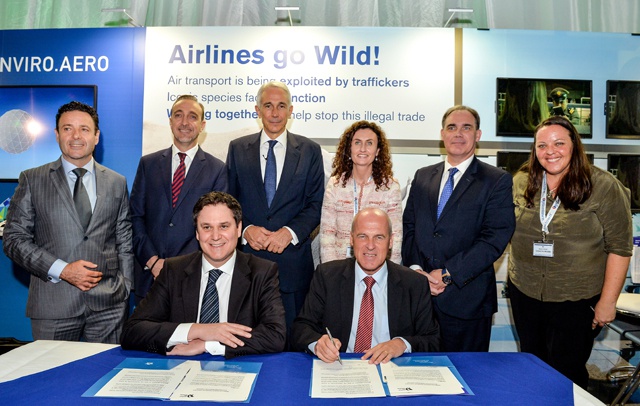 Roy Kinnear, Chief Executive Officer of Air Seychelles (second from rights standing) pictured at the signing ceremony of the Declaration of the United for Wildlife International Taskforce on the Transportation of Illegal Wildlife Products at the IATA Annual General Meeting in Dublin last Thursday. (Air Seychelles)

The signing of the Buckingham Palace Declaration by Air Seychelles commits the airline to take concrete actions to shut down routes used by traffickers of the illegal wildlife trade.

Air Seychelles’ chief executive Roy Kinnear, who signed the document last week, says airlines have an important role to play in putting a stop to the black market trade of illegal products.

“The natural heritage, biodiversity and rich marine life of Seychelles is what makes our island home special and that is why conservation efforts are so close to the heart of Air Seychelles,” said Kinnear in a press statement.

Air Seychelles was one of five equity partners of the UAE-based Etihad airways that signed the agreement at the annual general meeting of the International Air Transport Association, IATA, held in Dublin.

Kinnear noted that with the island nation’s proximity to the African continent which has some ‘wildlife trade hotpots,’ the declaration will help to preserve the biodiversity of not only Seychelles but also Africa and beyond.

The Buckingham Palace Declaration was first signed in March this year. The document was drafted by legal, conservation, transport, and customs experts making up the United for Wildlife Transport Taskforce. United for Wildlife is a grouping of seven conservation organizations led by The Royal Foundation of The Duke and Duchess of Cambridge and Prince Harry.

According to United for Wildlife, the global illegal trade of plant and animal species is valued between $5 to $20 billion a year.

The Seychelles environment ministry says that while enforcing control measures have helped to prevent such trade, the 115-island archipelago has recorded incidents in the past where people have tried to go out of the country with items such as turtle shells and kernel of the coco-de-mer, two species that are protected by law.

“Air Seychelles is also used as a transit airline to other countries and in the past we have had incidents where species of monkey, birds or others have been seized. There’s not so many incidents but it can happen so we welcome such an agreement,” Alain de Comarmond, the principal secretary for environment, told SNA.

“This will also help the airline to better understand the issue of illegal trade of wildlife as most of such trade are done through the airlines and if they do not know about such international conventions this is where such illegal activities can occur.”

De Comarmond says the step taken by the airline will also add to measures that are already in place. He noted that Seychelles is also a party to the convention on international trade in endangered species of wild fauna and flora. The CITIES convention obliges member countries to communicate when there are movements of plants and animal species especially endangered ones.