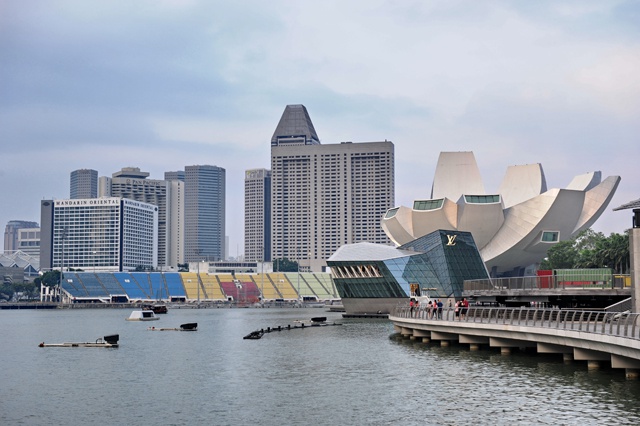 People stand along the Marina Bay promenade in Singapore on March 4, 2014. Singapore confirms it will cut off Internet access for government work stations within a year for security reasons, a surprise move in one of the world's most wired countries (AFP Photo/Roslan Rahman )

(AFP) - Singapore confirmed Wednesday it would cut off Internet access for government work stations within a year for security reasons, a surprise move in one of the world's most wired countries.

The decision will not disrupt government operations, the Infocomm Development Authority (IDA) said after local daily The Straits Times reported that some 100,000 computers would be affected.

Industry sources said the measure was aimed at preventing cyber attacks as well as the spread of malware that might enter the government email network thought Internet-enabled work stations.

Singapore is one of the world's most Internet-savvy societies, offering broadband speeds envied by many.

A wide range of government services are available online, including registering for marriage, filing complaints to the police and video consultations with doctors.

Government services will not be disrupted by the security measures, sources familiar with the plan said.

The Straits Times said public servants would still have access to the Internet on their personal devices such as tablets and smartphones.

Dedicated Internet-linked terminals will be issued to civil servants who need them for work, the newspaper added.

"There are alternatives for Internet access and the work that officers need to do, does not change.”

Singapore announced in 2014 it was stepping up IT security measures following attacks on a section of the prime minister's website, as well the website of the presidential residence.