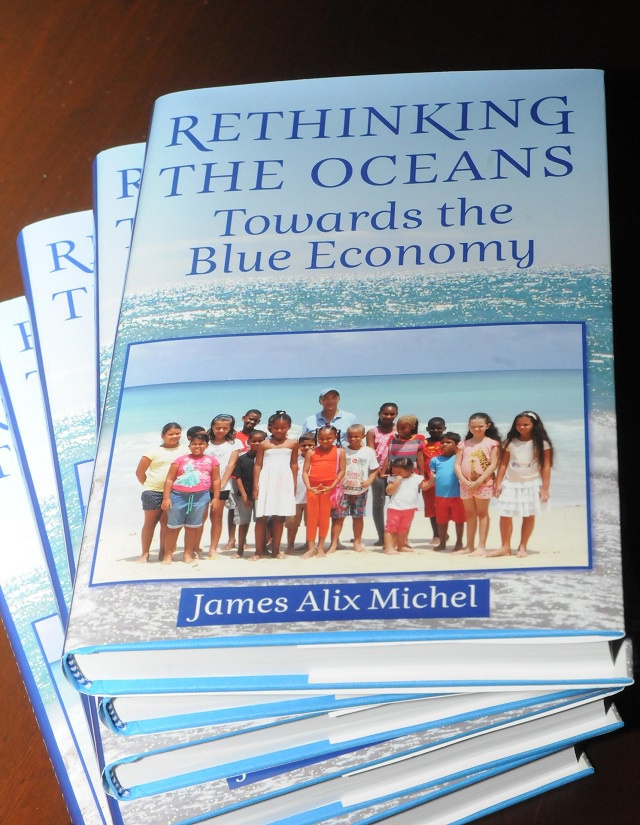 (Seychelles News Agency) - A new book that tells the story of the ocean, its economic potential and the need to ensure the sustainable exploitation of its resources for the future generation has been published by Seychelles President James Michel.

"Rethinking The Oceans – Towards the Blue Economy: was launched Wednesday evening at State House, coinciding with World Oceans Day celebrated on June 8.

Explaining the title of his book, President Michel said he wants people to think afresh about what lies beyond the Seychelles’ shores and to looks at ways this can be done.

“I have been inspired by fellow Seychellois. Fishermen, who daily sail beyond the horizon, conservationists who devote themselves to protecting the marine environment, and our brave sailors who, alone, faced the menace of piracy before international help arrived,” said Michel.

Seychelles is an archipelago of 115 islands in the western Indian Ocean with an exclusive economic zone covering 1.3 million square kilometres. The island nation’s economy depends heavily on tourism and fishing, two industries reliant on the Seychelles’ abundant ocean resources.

Seychelles has been actively promoting the Blue Economy concept both locally and at international level, stressing on sustainable development vis-à-vis ocean and maritime related activities.

Michel, who is spearheading the Blue Economy initiatives, said his book tells the story of the Blue Economy to date -- how the concept has come onto the world stage, the many aspects it embraces, and what it can offer in the future.

“The Blue Economy represents a new frontier. A new frontier in mankind’s endeavours not to ignore the land but to take a fresh look at the sea,” said Michel.

“We championed it and gave it new meaning and we brought the potential of the oceans to the attention of the world. Today we have managed to internationalise it and put it on the agenda of many international organisations,” he added.

Michel has dedicated his book to the children of Seychelles whom he describes as “future sentinels of nature and the guardians of our oceans,” adding that everyone should ensure that the beauty and the riches of the oceans are there for the benefit of future generations.

The 227-page book, has been published by an American publishing company, Paragon House.

Dr. Gordon Anderson, the founder and president of Paragon House and the editor-in-chief of the International Journal on World Peace commended Michel for what he described as a “much-needed book on public policies towards the oceans.”

Anderson, who attended the book launch, said the book was refreshing as it offers ‘a mature reflection’ on the complex issues and seeks policies and solutions which would be beneficial to both human beings and the oceans.

Anderson said "Rethinking the Oceans – Towards the Blue Economy" would appeal to everybody as it was “well-organized, easily readable and has a wide-ranging overview of issues all should become aware of, whether we live on islands, or whether we are landlocked like my homeland of Minnesota.”

The new publication containing eight chapters is accompanied by colourful photographs of the ocean, its resources, and ocean related activities as well as President Michel’s promotion of the concept on the international arena.

The Seychelles minister responsible for the Blue Economy department said the book offers food for thought “for those who appreciate the ocean, and for those of us who not only want to protect it, but also wish to see it contribute even more towards our socio-economic development.”

The book was also endorsed by the Seychelles founding president, James Mancham, who congratulated Michel for having found time to write and promote Seychelles as a pioneer in the field of the blue economy.

Describing it as an eye opener, Mancham said: “This book therefore should be read by anyone seriously interested in the future of the oceans.”

His previous works include Island Nation in a Global Sea: Making the new Seychelles, (2014), A Man of the People (2010) and Distant Horizons, My Reflections (2011).

According to State House, the new book will soon go on sale both locally and internationally.