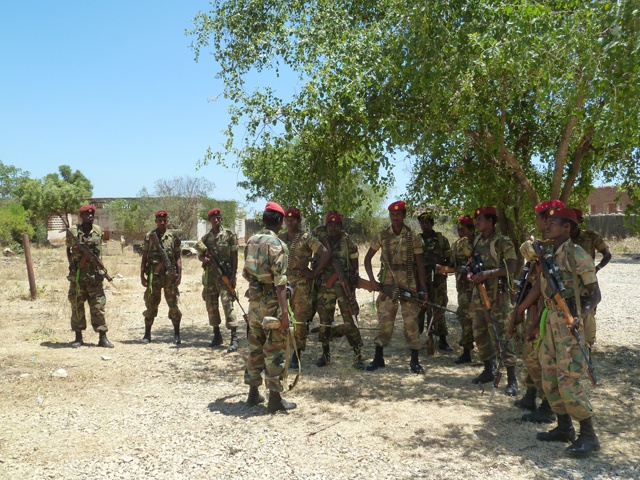 A picture taken on March 2, 2012 shows Ethiopian soldiers receiving a briefing before displaying of weapons left behind by Shebab militias at their former base in Baido, which was taken over from Shebab rebels on February 22. (AFP PHOTO / JENNY VAUGHAN)

(AFP) - Shabaab fighters attacked an Ethiopian army base in central Somalia early Thursday, in the latest raid targeting foreign soldiers deployed as part of an African Union force in the country.

The Al-Qaeda linked militants attacked the base in Halgan in Hiran region, the group said in a statement distributed on its Telegram messaging channel.

It claimed to have killed "at least 60" Ethiopian soldiers while 16 of its own fighters also died.

On its Twitter account the African Union Mission in Somalia (AMISOM) -- comprising troops from Burundi, Djibouti, Ethiopia, Kenya and Uganda -- confirmed "an attempted Shabaab attack" but gave no casualty figures.

"The enemy was successfully repulsed," AMISOM said, claiming also to be "in pursuit" of the attackers.

Residents in the area close to Halgan said the attack began when a vehicle driven by a suicide bomber exploded at the entrance to the base, after which jihadist gunmen fought their way in.

"There was a huge blast and then heavy exchange of gunfire started," said Osman Adan, a nearby resident.

Shooting had died down by mid-morning Thursday.

The Shabaab launched this style of "swarming" attack a year ago and have since overrun forward operating bases manned by Burundian troops in Lego in June, Ugandan troops in Janale in September and Kenyan troops in El Adde in January.

The contributing countries refuse to confirm casualty numbers but it is believed that scores of AMISOM have been killed in each attack.

In the El Adde attack alone more than 140 Kenyan soldiers are believed to have been killed, although the Kenyan government has refused to confirm any numbers.

This is the first such raid on an Ethiopian outpost in Somalia.

"Mujahideen fighters stormed the base and massacred many of the Ethiopians," the Shabaab said in its statement.

The Shabaab was forced out of the capital Mogadishu five years ago but continues to carry out regular attacks on military, government and civilian targets in its battle to overthrow the internationally-backed administration.

The group commonly steps up its attacks during Ramadan, but this year is considered critical, with the Shabaab eager to disrupt an expected change of government leadership due in the coming months.