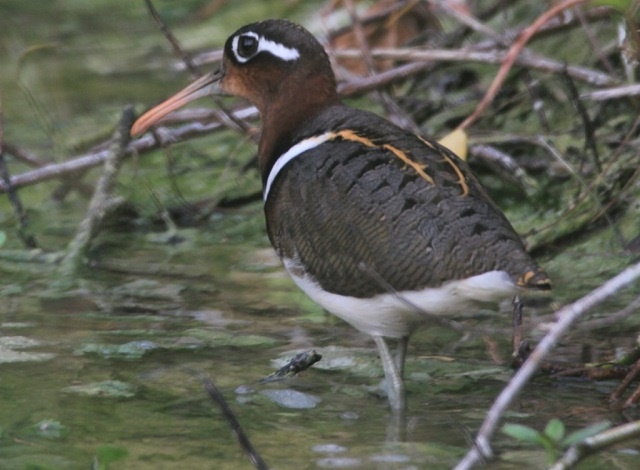 The greater painted-snipe -- a rare and unusual bird -- was spotted for the first time in Seychelles earlier this year. (Catherina Onezia)

(Seychelles News Agency) - A student of the University of Seychelles has spotted for first time in the island nation a greater painted-snipe, a rare and unusual bird.

Catherina Onezia first saw the greater painted-snipe at Perseverance, a reclaimed island close to the centre of Mahe, the most populated island of the archipelago.

The species is a rarity among birds as the female is larger and has brighter coloured feathers than the male. Usually in the bird family, it is the opposite -- males are larger and more colourful than females.

“To spot a rarity I think it is up to chance, but if you have some special skills to spot elusive birds, then when you are on the field, you know what you are looking for,” Onezia told SNA.

It took the second sighting for Onezia to snap a photo of the species.

“When I spotted the bird, I knew straight away that it was a snipe and one that I hadn't spotted before. So, with camera in hand, we became the paparazzi and it (the bird) the unique superstar,” said Onezia.

This is the first time the greater painted-snipe has been seen in Seychelles, a group of 115 islands in the western Indian Ocean.  The species is characterised by its slightly downward curving bill used for probing preys in water and mud with long partly webbed feet adapted for walking in muddy areas.

Another rare sighting was of a Eurasian reed warbler, which landed on the boat of Wayne Haselau off the coast of Alphonse during a fly-fishing trip.

Records of sightings of avian visitors in the Indian Ocean Islands are kept by the Seychelles Bird Records Committee (SBRC), set up in 1992 to confirm the identity of migratory and vagrant species in Seychelles.

The committee is made up of ornithologists, including Seychellois Adrian Skerrett.

Skerrett told SNA that the 2015-2016 season has not been an exceptional one, but they have received reports from local birdwatchers and visitors.

One species reported in higher number than usual is garganey, a small duck that breeds in Europe and western Asia.

“Garganeys are regular annual migrants through Seychelles at this time of year. This year, there have been sightings on Aride, North and Mahe,” said Skerrett, adding that “we have collected nearly 250 sightings over the years, and over 80 percent were in the period October to December last year.”

To date, 272 species have been recorded in Seychelles, including 62 breeding species, 28 yearly migrants and 172 vagrants.

Providence, a reclaimed area on the eastern coast of Mahe, has had several special visitors this season including as marshes and muddy areas are the birds’ favourite playgrounds when escaping the cold winters of the northern hemisphere.

Recently, new colonies of greater crested tern and black-naped tern were also discovered at Bancs Providence during an expedition by Island Conservation Society.

With thirteen endemic birds, Seychelles is year-round paradise for birdwatchers.

Migratory species are common during the North West monsoon from October to late April.

“What we take for granted such as Seychelles Blue Pigeon and Seychelles Sunbird because we see it every day, is something people pay a lot of money to see and photograph,” says Steve Agricole, owner of Ecotours, conducting his bird watching expeditions.

Agricole, a regular contributor to the committee, says seabird colonies known to breed on small islands of the archipelago, are of great interest to birdwatchers.

Sightings of an unusual bird could be reported to the Seychelles Bird Records Committee on the link: http://www.seychellesbirdrecordscommittee.com/contact-us.html