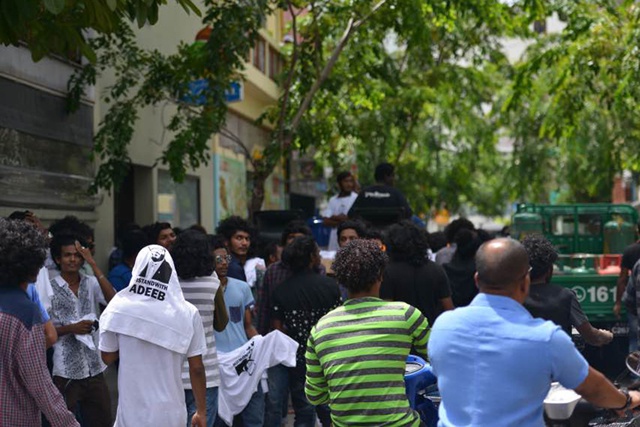 In this photograph taken on October 24, 2015, supporters of Maldives vice-president Ahmed Adeeb carry t-shirts with his picture as they gather in Male. (AFP PHOTO/ Adam SIREII)

(AFP) - Former Maldives deputy leader Ahmed Adeeb was convicted of plotting to assassinate the president and sentenced to 15 years in prison Thursday, four days after being jailed in another case.

With the sentencing, almost all of President Abdulla Yameen's key rivals are either living in exile or in jail in the island nation, which has been rocked by political turmoil in recent years.

Following a closed-door trial, the Criminal Court found ex-vice president Adeeb and two of his military bodyguards guilty of attempting to kill the president by setting off a bomb on his speedboat on September 28.

Yameen escaped unhurt, but his wife and two others were slightly injured. The FBI was enlisted to investigate the incident but reported there was no evidence that a bomb was behind the blast.

But Yameen had Adeeb arrested and tried in secret following allegations his former deputy wanted to topple him.

Adeeb's lawyer, Moosa Siraj, told the Maldives Independent website the court warned him not to criticise the trial.

"The Criminal Court has barred me from calling the trial unfair, but we have concerns and intend to launch an appeal immediately," Siraj said.

Another lawyer, who declined to be named, said Adeeb's two bodyguards who were also convicted Thursday were sentenced to 10 years each.

Reporters have been barred from the trial after the court invoked national security concerns and said it would not make the hearings or verdict public.

Adeeb, 34, once a close confidant of Yameen, had enjoyed a meteoric rise until he was dramatically impeached in November after being accused of the assassination plot.

On Sunday, Adeeb was jailed for 10 years on an unrelated terrorism charge relating to his role in cracking down on an anti-government protest in May last year.

President Yameen is accused of jailing and silencing dissidents in the country, a popular holiday destination for honeymooners.

Nasheed, whose legal team includes high-profile human rights lawyer Amal Clooney, was sentenced to 13 years in prison on controversial terrorism charges last year but was allowed to travel to Britain for surgery in January and was granted political asylum last month.

And nearly four months ago, Yameen secured the jailing of Sheikh Imran Abdulla, leader of the opposition Islamist Adhaalath Party.

He was sentenced to 12 years after being tried for allegedly inciting unrest during an anti-government rally in 2015.