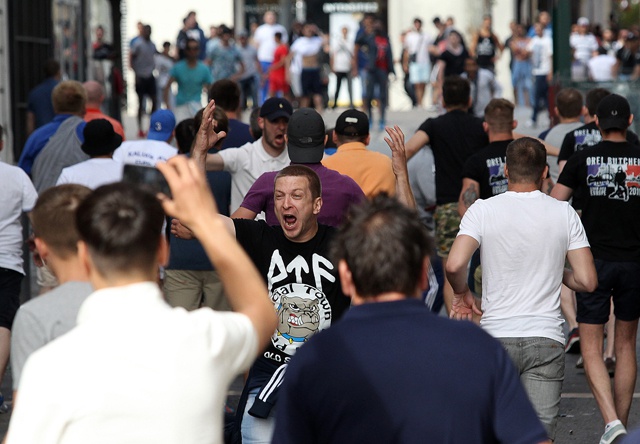 A supporter shouts during street brawls ahead of the Euro 2016 football match England vs Russia, southern France, on June 11, 2016. (JEAN CHRISTOPHE MAGNENET / AFP)

(AFP) - UEFA on Sunday opened disciplinary proceedings against Russia after crowd disturbances in the stadium at the end of the Euro 2016 match against England.

It said sanctions will be decided on Tuesday once the Russia Football Union has made its case.

UEFA said there were "segregation issues" at Stade Velodrome and said it would take action to strengthen the deployment of security personnel at stadiums.

As the players left the pitch at the end of the 1-1 draw, Russian fans were seen charging into a section occupied by English supporters and fists were thrown.

The violence though was restrained compared to the scenes before the match when hundreds of English and Russian fans fought pitched battles in the Vieux-Port area of Marseille.

An Englishman was left fighting for his life and more than 30 people were injured.

"UEFA expresses its utter disgust for the violent clashes that occurred in the city centre of Marseille, and its serious concern for the incidents at the end of the match inside Stade Velodrome," it said in a statement.

"This kind of behaviour is totally unacceptable and has no place in football.

"UEFA acknowledges that there were segregation issues at Stade Velodrome and will implement corrective measures to strengthen the deployment of security personnel at stadiums, in close collaboration with local authorities."

Russia's Sports Minister Vitaly Mutko on Sunday criticised the behaviour of his country's fans following the disturbances and conceded UEFA was likely to impose a fine, but he also laid the blame on the match organisers for failing to separate supporters.