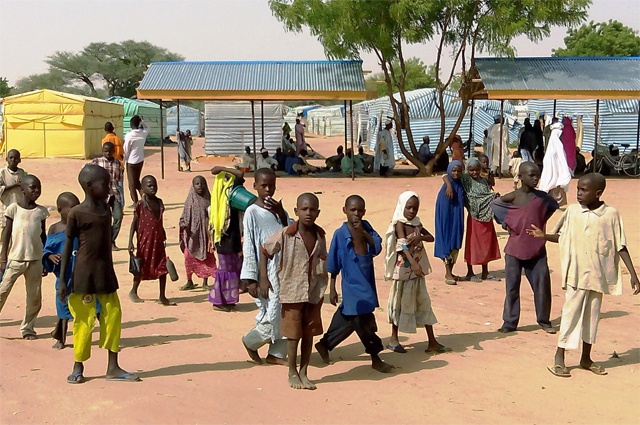 (AFP) - Nearly 700 people, most of them children, are receiving treatment in hospital in northeast Nigeria for severe malnutrition after being rescued from Boko Haram, the Borno state government said.

Sixty-one "critically malnourished" young children and babies were among 478 children, 196 women and 23 men brought to the state capital Maiduguri from the town of Bama on Monday, it said in a statement.

The infants were "undergoing medical care arising from extreme deprivation of food", Tuesday's statement said, adding that all the people were rescued after two years in captivity by the Islamist insurgents.

It was not immediately clear whether those taken to a special care unit had been brought from camps for internally displaced people (IDPs) in Bama.

But last week a civilian vigilante and a soldier based in the remote town of Banki, 60 kilometres (38 miles) from Bama, told AFP at least 10 people were "starving to death" every day.

Nigerian and international relief agencies were working with IDPs in Bama but none appeared to be in Banki, which was recaptured from Boko Haram in September last year.

The vigilante said 376 people had been buried in the last three months and those still alive were like "walking corpses".

The Borno state governor Kashim Shettima and aid agencies have warned about acute food shortages for IDPs in northeast Nigeria and the wider Lake Chad region.

Nearly 6,500 children were found to be severely malnourished at camps in Borno state last year, while more than 25,000 others had "mild to moderate symptoms", health officials said in February.

Nigeria's government has been encouraging people to return to their homes as the military counter-insurgency regains captured territory from the Islamic State group affiliate.

Last week, it signed an agreement with Cameroon for the return of 80,000 Nigerian refugees.

But farmlands in the mainly agricultural region have been devastated by the fighting, while homes and infrastructure have been destroyed.

Shettima said on Tuesday he had ordered a new IDP camp to be opened in Maiduguri for more than 10,000 people rescued from the countryside around the towns of Marte and Mafa in recent days.

The IDPs, who had been unable to return home because of insurgent activity near their villages, had been camped out under trees by the road from Maiduguri to Dikwa.

The Boko Haram conflict has killed at least 20,000 people since it started in 2009 and forced more than 2.6 million people from their homes.