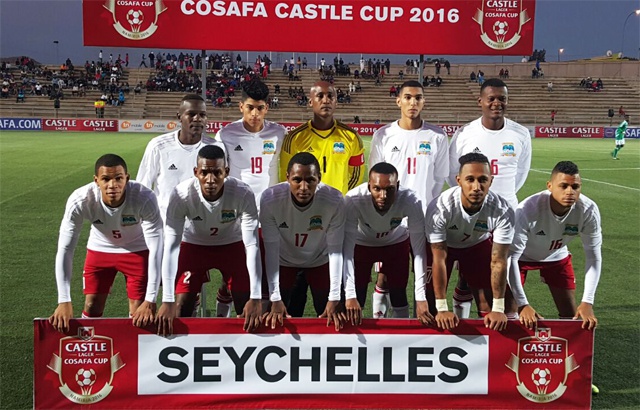 Photo of the Seychelles senior national team taken prior to their 1st COSAFA match against Madagascar on Saturday in Namibia. (Seychelles Football Federation)

The next international game for Seychelles, an archipelago in the western Indian Ocean, is on September 2 against Ethiopia, in the Africa Cup of Nations (AFCON2017) qualifying stage.

The island nation’s team are currently 3rd with 4 points in Group J, which Algeria lead with 13 points and Ethiopia, second with 8 points.

Zimbabwe, four-time winners of the COSAFA Cup, needed nothing less than a five-goal win against Seychelles in the case of a draw between Swaziland and Madagascar.

The East African team went ahead in the 21st minute when Pfumbidzai scored from the penalty spot, and Marshall Mudehwe made it 2-0 before the end of the first half. Zimbabwe scored three more in the second half.

Swaziland ensured their spot in the quarterfinals by winning 1-0 against Madagascar, keeping their first place in Group A.