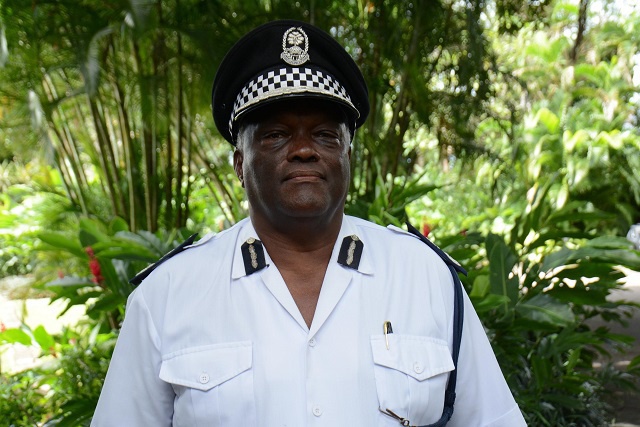 (Seychelles News Agency) - Ernest Quatre, 67, announced that he is stepping down as commissioner of the Seychelles police force this month. Quatre, a resident of La Retraite in the northern region of the main island, Mahé, joined the police force at age 18 in December 1966. He has worked in the special forces, the criminal investigation division and has served on the three main islands, Mahé, Praslin and La Digue.

SNA met with Quatre at the police headquarters in Victoria this week where he was busy finalizing a handover to incoming commissioner Reginald Elizabeth. The married man and father of four – a daughter and three sons—talked at length about his journey and what kept him going until he became the nation's longest-serving police officer.

SNA: Hello Mr. Commissioner. Tell us, how was it that you chose a career as a police officer?

EQ: When I was still in school, policemen in Seychelles wore khaki uniforms and I was fascinated by it. However, I was afraid of the police as parents would often ask them whether their children were behaving in the streets, so you knew that you could be in trouble if that was the case. Nevertheless, the desire to become a policeman slowly started to build as they were frequently patrolling the districts. At the time, I was living with my grandmother at Anse Royale who didn’t want me to join the force.

Upon leaving school in 1964 I worked as a labourer until 1966, when I applied for three jobs -- to be either a teacher, postman or policeman. I think it was destiny as the response from the police came faster. I remember during those days the afro style was in vogue and the first thing that came after being told my application was successful was to get rid of my afro before reporting to work the next day. I made the sacrifice -- got rid of my afro, trained for two months and then started to work.

SNA: What has kept you in the force for 49 years?

EQ: It has much to do with the way I was brought up. My folks were strict, but it did me a lot of good as it’s a disciplined job. Also, my philosophy has always been to accept criticism as this makes you strong and pushes you to do things even better.

SNA: You were appointed to the post of commissioner of the Seychelles police force in 2009 after rising through the ranks. Was this one of your aspirations?

EQ: My aim was to progress to being a chief superintendent. We are a small force and there can only be one commissioner. At the same time I always displayed that I was an exemplary officer and indirectly portrayed -- through my work, that I could be trusted with bigger responsibilities. The discipline, knowledge, hard work and leadership qualities displayed allowed me to be seen as someone who could hold the position and I did it for seven years.

SNA: How would you compare today from the time you joined the force almost 50 years ago?

EQ: The world has evolved so you have to expect new crimes to emerge. Recently for example, Seychelles has faced ATM frauds, something that was kind of new for the country although it has existed in other parts of the world for some time.

Back in the days we did not have too much crimes. In 1978 for example, I was working on La Digue and when doing crime statistics every month you could have three offences and on some months there were none. Today it’s different as we are in the technology age.

Back in the days, the police did a lot of street patrols or used bicycles as we did not have much vehicles and because of this people sensed that they were being monitored and this prevented them from getting involved in unnecessary situations. When it comes to the police force it was more disciplined maybe because it was a small group at the time.

SNA: There has been increased criticism in recent times during your tenure when it comes to the behaviours and professionalism of some members of the force. Do you think they were justified or is the public exigent?

EQ: I would say both. The public have become more exigent but also it has a lot to do with the personal attitudes some police officers choose to adopt. I would say the criticisms are directed at a minority though, but we have to deal with it as it does not portray well on the police force in the eyes of the public. You will be reprimanded once, twice and there are police officers who have been terminated because of such recurring behaviours.

SNA: Would you say you are satisfied with all you have been able to do and implement during your time as commissioner or is there things that you could have done better?

EQ: I did the best I could as a police officer. Whenever I handled a case I always wanted to see the end result, then it’s up to the court will decide. During the seven years I have worked as the commissioner I acknowledge that not everyone will agree with the way one does things but I believe I did my best. One can make mistakes, I cannot say that everything was perfect but I am satisfied with my work.

SNA: What does it takes to be a good policeman?

EQ: You have to love what you do as is the case for every job. For me being a policeman was a vocation. Today we have people with a lot of potential and good academic requirements joining the force but they lack determination, devotion and love for the job.

Being a policeman you have to make some sacrifices for the job as I would call it. You have to be careful of what you do outside of the job, the places you go, and your crowd, after all it’s a 24-hour job. You are a policeman at home, in the streets, you have to decide to follow all the norms and if you do this you will not find the work difficult.

SNA: Would you say it’s a job for both men and women and that there are prospects for both?

EQ: When you look at the force today the number of women is almost surpassing the men. Maybe there are other jobs attracting the men as things have evolved compared to yesteryears when being a teacher, nurse or policeman were the three main career choices. Nevertheless, I would say there are prospects for both men and women to progress in the force.

SNA: Outside of being a policeman, who is usually somebody strict, how would you describe your personality?

EQ: I am strict yes -- if you ask my children they will confirm that I always told them that if they ever got into trouble they would be dealt with like anyone else. One of my sons has joined the police force. He is now studying for a masters in criminology, psychology and criminal profiling and will complete his studies in the UK in September. At the same time I happen to be very tolerant. Even if people would offend me I am not vengeful, on the contrary I would go out of my way to help that person when the need arise.

SNA: Now that you are retiring what are some of your plans?

EQ: My wife has had knee surgery and although everything went well, I know she will need a lot of support and I plan to give back the support she has given to me during my career. Also, after 49 years as a police officer you need to rest. I will probably go on holiday overseas after my wife is completely healed. I also love animals. I have dogs, rabbits at home and I do a little bit of gardening. Reading is also something I will keep on doing, I have already ordered a dozen books.

SNA: Would you be willing to still support the police force if it is requested of you?

EQ: Even though I am leaving and will no longer wear the police uniform I believe that once a policeman, always a policeman and if an officer finds himself in a situation and need my help I am ready to advise him.

SNA: What advice would you give to the serving police officers and those willing to join?

EQ: The police force is a good career choice and once you decide and know the things you can and cannot do it can be satisfactory, with a lot of prospects. People will come to see you with various needs and expect you to solve their problems and if you cannot do so to show them where to go. Being a police officer one also has to be disciplined, love the job and do what is expected of them and not otherwise.