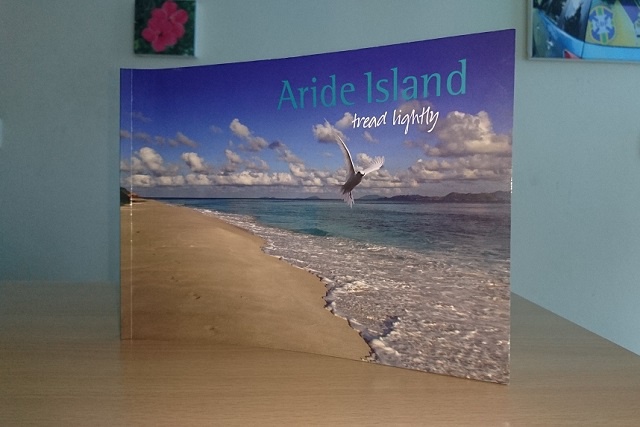 The book’s title refers to the need to keep the human footsteps on the island as small as possible. (Seychelles News Agency)

(Seychelles News Agency) - One of the Seychelles islands, Aride, is marking 40 years of conservation with the launching of a new book entitled ‘Aride Island – Tread Lightly.’

Local conservationist and chair of the Island Conservation Society, Adrian Skerrett, told SNA that: “It is primarily a history book which talks about the plantation days and the leper colony days.”

Skerrett adds that the book also includes interesting visitors to Aride such as Irishman Percival Wright and Marianne North, whose painting of the island hangs in the North Gallery at Kew Gardens in London.

The book’s title refers to the need to keep the human footsteps on the island as small as possible.

“We need to have a human presence on the island to manage the reserve for educational and awareness purposes but we should keep it as small as possible. For example, we don’t intend to have a hotel there,” said Skerrett.

Aride is one of the success stories for conservation in the island nation and is today the most natural of any islands in Seychelles says Skerrett. Its only human inhabitants are the reserve’s staff.

Managed by the Island Conservation Society of Seychelles, Aride was given the special reserve status under the Seychelles National Parks and Nature Conservancy Act in 1975.

The island hosts one of the most important seabird populations in the region and 18 species of native birds, including five only found in Seychelles, an archipelago in the western Indian Ocean.

Around 2,000 visitors land on Aride every year to see the different bird and plant species.

The new book was compiled and edited by Skerrett and Tim Sands, a former trustee of Britain’s Royal Society of Wildlife Trusts, who had been involved with Aride Island for decades.

The 145-page book contains photographs and texts contributed by some 40 individuals who had been involved in conservation work on the island.

The book’s launch at the British High Commission last week coincided with the birthday celebration of Queen Elizabeth II.

The book is on sale at a promotional rate of $29 until the end of July after which it will go up to $36.