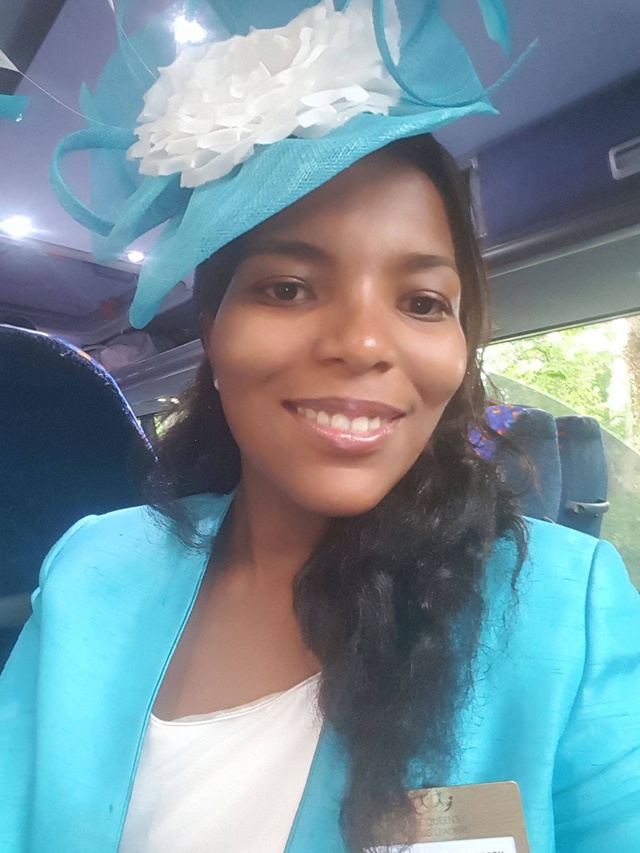 Angelique on her way to accept her medal as one of the recipients of the 2016 Queen's Young Leaders Award on Thursday. (Angelique Pouponneau)

(Seychelles News Agency) - The Queen’s Young Leaders Award sends out a message: the world is in safe hands with young people as leaders of the present and the future. This is what Angelique Pouponneau -- the first Seychellois recipient -- believes such an honour represents.

Pouponneau was among 60 young individuals from 45 Commonwealth nations who were presented with their medal by her Majesty Queen Elizabeth at Buckingham Palace on Thursday.

The 25-year-old views the recognition as something that goes beyond a personal achievement.

She described the Buckingham Palace ceremony as a ‘special and inspiring moment’ of her life.

“I was most moved by the words of Prince Harry who said: You have already been an inspiration to so many, but I hope this award will inspire you to go out and achieve even greater things in the future."

Pouponneau says receiving her medal of honour from the Queen was also an opportunity to exchange a few words with her about the work SIDS Youth AIMS Hub – Seychelles is doing in the 115-island archipelago in the western Indian Ocean.

Interestingly, this was Pouponneau’s third time meeting the British Monarch, having done so while studying in London a few years ago and again in March while attending a Commonwealth Day reception.

She described Queen Elizabeth as an inspiring person who is passionate about the work being done by young people across the Commonwealth countries.

The Queen’s Young Leaders Award which targets individuals aged 18 to 29, was launched in 2014 to recognise young people from Commonwealth countries using their leadership qualities to make a difference in the lives of others.

The 2016 group is the second cohort of young leaders that have been honoured. It is planned that 60 individuals -- one for every year that the Queen had served as Head of the Commonwealth at the time of her Diamond Jubilee, would be chosen each year until 2018 for the award.

Apart from receiving a medal, being a recipient also involves training and mentoring aspects.

As the first Seychellois to receive the award, Pouponneau told SNA that she has been following an online training on ‘leading change’ since December and is also being assigned mentors to be given advice on challenges she is facing.

Pouponneau will be back in Seychelles on Monday following her one-week trip to the United Kingdom, which she says was jam-packed with visits to several places of interest, including 10 Downing Street and the British Broadcasting Corporation (BBC).

Aside of being a young leader advocating strongly for sustainable development Pouponneau is also a lawyer and currently serving a two-year mandate as the Vice-Chairperson of the Commonwealth Youth Council.