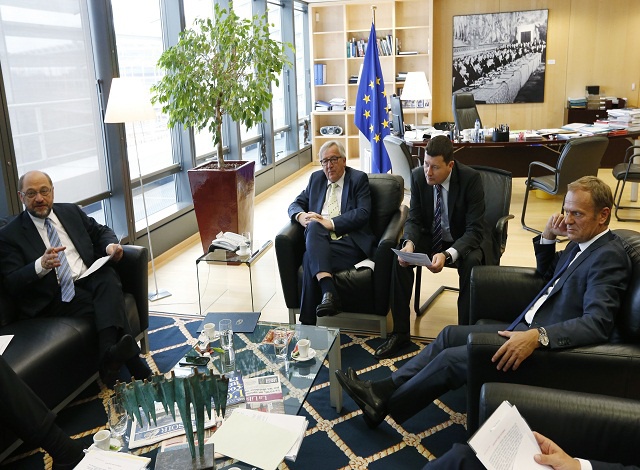 (From L) EU Parliament leader Martin Schulz, European Commission chief Jean-Claude Juncker, Juncker's Head of Cabinet, Martin Selmayr and President of the European Council, Donald Tusk are pictured during a meeting with the Dutch Prime Minister (not pictured) at the EU Headquarters in Brussels on June 24, 2016. European Commission chief Jean-Claude Juncker on June 24, 2016 denied that Britain's shock vote to leave the EU was the start of a process of disintegration for the bloc. (FRANCOIS LENOIR / POOL / AF)

(AFP) - A stunned EU on Friday urged Britain to leave as "soon as possible" amid fears the devastating blow to European unity could spark a chain reaction of further referendums.

German Chancellor Angela Merkel and French President Francois Hollande led calls for the European Union to reform in order to survive a traumatic divorce with Britain.

In a sign that the bloc wants to move on swiftly, EU chiefs told Britain in a strongly-worded joint statement to "give effect to this decision of the British people as soon as possible, however painful that process may be."

The uncompromising stance came after Prime Minister David Cameron said he would resign and leave the negotiations on Britain's departure from the 28-nation club to a successor who will be named by October.

European Commission chief Jean-Claude Juncker said he was "very sad" that Britain had voted to leave, but repeated that there would be "no renegotiation" of Britain's membership.

Juncker, a former Luxembourg premier and strong federalist, said "no" when asked if the vote spelled the beginning of the end for a European Union that faces a huge rise in populist and eurosceptic parties.

Worried European leaders will hold a series of crisis talks in coming days, with Merkel saying she would host the leaders of France and Italy along with EU President Donald Tusk in Berlin on Monday to try to chart a reform plan.

"We take note of the British people's decision with regret. There is no doubt that this is a blow to Europe and to the European unification process," Merkel told reporters in Berlin.

With global markets in turmoil, she said it was important to "not draw quick and simple conclusions from the referendum in Great Britain, which would only further divide Europe."

Hollande said the Brexit vote was a "grave test for Europe," adding that the bloc "must show solidity and strength in its response to the economic and financial risks."

He said the British should leave "with the shortest possible delay".

Italian Prime Minister Matteo Renzi echoed calls for reform, saying "Europe is our house" and that "the house needs to be renovated, perhaps freshened up".

Greek Prime Minister Alexis Tsipras, whose debt-hit country went through a referendum on its way to a bitterly-fought debt bailout, said the result could be a "wake-up call" for the EU to "change its policies".

But he warned that it could also be "the start of a dangerous path backwards for our peoples."

EU chief and former Polish premier Tusk -- who had earlier warned that a Leave vote could "end Western political civilisation" -- put on a brave face, saying that "what does not kill you makes you stronger".

He insisted that the bloc was "determined to keep our unity at 27" and said the remaining leaders would meet separately without Cameron on the sidelines of a summit of the full 28 in Brussels next week.

The European Parliament will meanwhile pass a motion at an emergency meeting on Tuesday urging Cameron to trigger the exit process by invoking what is known as Article 50.

The biggest fear was of contagion, with immediate calls by far-right leaders in France and the Netherlands for their countries to hold their own votes on EU membership.

Donald Trump, the presumptive Republican US presidential nominee, also weighed in with his support while on a visit to Scotland, saying the vote for Brexit was a "fantastic thing," evoking a "real parallel" with his own campaign.

European Parliament President Martin Schulz said he was speaking to Merkel to avoid a "chain reaction" of eurosceptic success across Europe, adding that it would "absolutely not happen."

Several European leaders expressed "sadness", including Spanish Prime Minister Mariano Rajoy, whose country goes to the polls on Sunday in yet another test for Europe's traditional politics.

Binali Yildirim, the prime minister of Turkey -- whose EU membership bid and migration crisis deal was a key part of the pro-Brexit campaign -- said he believed the EU "should look at these (Brexit) developments and review its future vision."

Earlier this week, President Recep Tayyip Erdogan said Turkey could hold its own referendum on whether or not to continue its EU accession process.

Turkish deputy premier Nurettin Canikli meanwhile warned that "the period of the disintegration of the European Union has begun. And the first vessel to have departed is Britain."

Britain's departure from the EU has also sparked wider fears for the international order, but UN Secretary General Ban Ki-moon said he expected the EU to remain a solid partner.

And NATO Secretary General Jens Stoltenberg agreed that Britain would remain a "strong ally" of the US-led but largely European military alliance.