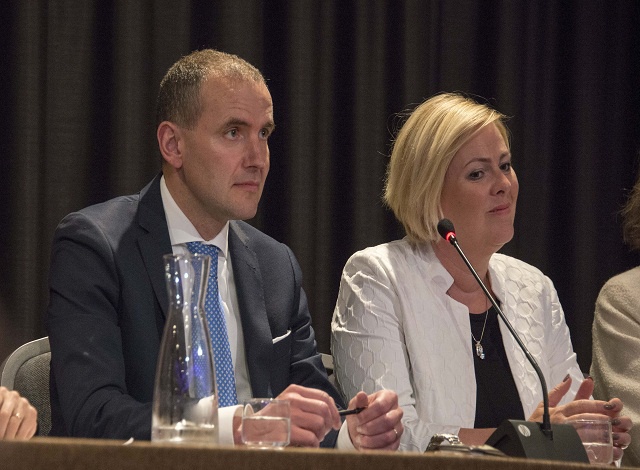 (AFP) - Political newcomer Gudni Johannesson claimed victory in Iceland's presidential election after riding a wave of anti-establishment sentiment, though the vote was eclipsed by the country's eagerly-anticipated and historic Euro football match.

"All the votes have not been counted, but I think we have won," Johannesson told supporters. With 36 percent of ballots counted, he was credited with 38.6 percent of votes.

The victory was especially sweet for Johannesson -- a history professor and political commentator who has never held public office and has no party affiliation -- as he celebrated his 48th birthday Sunday.

He was trailed by businesswoman Halla Tomasdottir, also non-partisan, who took 29.4 percent of votes.

David Oddsson, a former conservative prime minister and central bank governor who had been Johannesson's closest rival throughout most of the campaign, garnered just 13 percent of votes.

Johannesson only decided to run for the presidency after the so-called Panama Papers leak in April which detailed offshore accounts and implicated several senior Icelandic politicians, including the prime minister who was forced to resign.

Throughout the campaign, Johannesson emphasised his non-partisan, independent vision of the presidency, appealing to voters with his calm nature and consensus-oriented approach.

He vowed to restore their faith in the political system after years of public anger toward politicians for miring the country in scandals and financial woes.

The president in Iceland holds a largely ceremonial position, acting as a guarantor of the constitution and national unity, and more important legislative elections are due in the autumn.

But the outrage that fuelled mass street protests in April and led to ousting of premier Sigmundur David Gunnlaugsson appeared to have dissipated somewhat in the final days of the campaign, as euphoria erupted over the Icelandic football squad achieving a historic feat in the Euro 2016 football tournament.

A North Atlantic island of just 334,000 people, Iceland beat Austria 2-1 on Wednesday to qualify for the last 16 in its first major international competition, and will face off against England on Monday.

The news dominated the headlines, with only sparse coverage of the final days of the election campaign.

Britain's vote to leave the European Union also headlined the news on the eve of the election in Iceland, which itself had applied for EU membership in 2009 after suffering a devastating financial crisis in 2008, but abandoned the bid six years later.

Like most of Iceland's voters, Johannesson is opposed to EU membership.

In a final debate on Friday, he said Brexit changes "much for the better for us Icelanders," suggesting the European Economic Area agreement that non-EU members Norway and Iceland have with the EU could play a more important role with Britain on board.

"I think we will see a different kind of president. Johannesson is not likely to be as political as Grimsson sometimes was," University of Akureyri political science professor Gretar Eythorsson told AFP.

Grimsson is the only Icelandic president to have exercised his right to veto bills in parliament, doing so three times over two decades.

Johannesson held a commanding lead over the other eight candidates from the beginning of his campaign in early May.

The last opinion surveys before the vote credited him with between 45 and 49 percent of voter sympathies, significantly higher than the actual result, with Tomasdottir posting a surprisingly strong showing.

Johannesson was until recently known to Icelanders as one of the country's most prominent political commentators from the University of Iceland.

In a nation basking in a strong economy, low unemployment and robust purchasing power, Johannesson's views are generally seen as moderate and centrist.

He has vowed to modernise political life and give voters more of a voice by, among other things, introducing citizen-initiated referendums.

Casting his ballot Saturday, Johannesson told AFP he was satisfied he had "managed to present to the people my vision of the presidency".

Asked what his first task would be if he were to win, he replied: "Go to France on Monday and see Iceland play England."

Between 10,000 and 20,000 Icelanders are in France to watch the Euro, an astounding number for such a small country.

General » Be a reporter: Write and send your article » Subscribe for news alert
Tags: Iceland, Vote