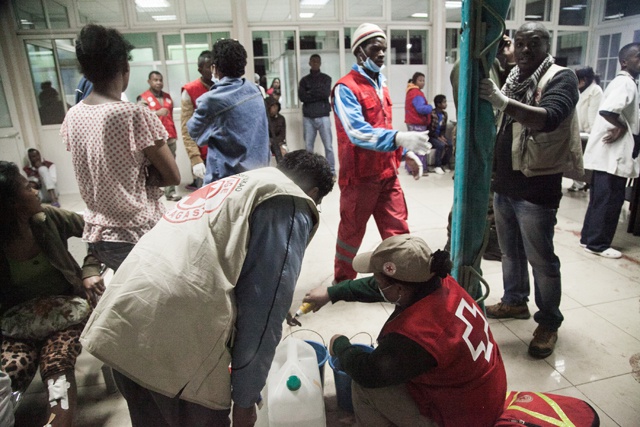 (AFP) - At least two people were killed and some 70 wounded in a grenade blast at a stadium in Madagascar's capital Sunday during celebrations marking the country's independence day, the gendarmerie said.

"The explosion was caused by a grenade," general Anthony Rakotoarison, head of security and intelligence with the national gendarmerie, told AFP by phone.

"We consider this a terrorist act," he said, but added that the motive was as yet unclear.

The blast struck the Mahamasina municipal stadium in Antananarivo at around 1600 GMT, just as a free concert was taking place to celebrate the island nation's 56th anniversary of independence from France.

A military parade was held at the stadium earlier in the day.

Prime Minister Olivier Solonandrasana Mahafaly, who rushed to hospital to visit the injured, strongly condemned the "disgusting and shameful" attack.

He told reporters some 72 people were hurt in the explosion.

The last attack to hit Madagascar was in January 2014 when a grenade blast killed a toddler and injured several other people outside the same stadium targeted on Sunday.

No arrests were ever made in connection with that attack and there was no claim of responsibility.

Madagascar, one of the world's poorest countries, is slowly getting back on its feet after a lengthy period of political instability triggered by the 2009 ouster of president Marc Ravalomanana by Antananarivo's then-mayor Andry Rajoelina.

Rajoelina led a transitional government until late 2013, when a new election that was designed to resolve complex power struggles brought President Hery Rajaonarimampianina to power.

International donors, on which the country relies heavily, only recently returned to Madagascar after withdrawing over the 2009 turmoil, and the economy is starting to show the first signs of recovery.