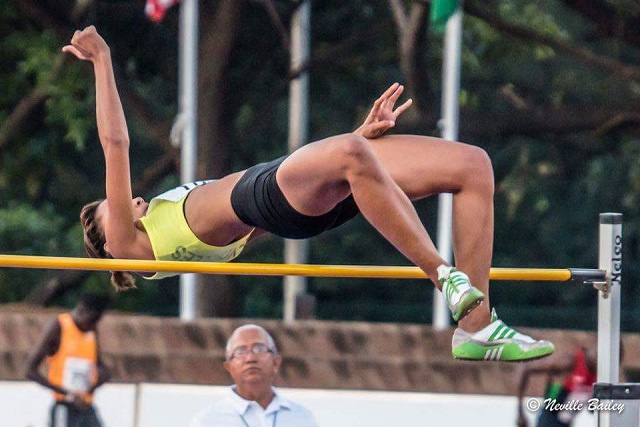 Lissa Labiche cleared the bar at 1.85 metres winning gold in the senior female category at the 20th Confederation of African Championship in South Africa on Sunday. (Neville Bailey)

(Seychelles News Agency) - Seychellois high jump specialist Lissa Labiche won a gold medal in the 20th Confederation of African Championship on Sunday as she continues her hunt for a spot in the Olympic Games in Brazil.

Labiche came out first in the final of the senior female category, with a height of 1.85 metres, followed by Nigerian Doreen Amata, 1.82, and Egyptian Bassant Hassan, 1.79.

Although she is a champion, Labiche is not satisfied with her result.

“The competition was ok, but I’m not happy with my result even though I am an African champion,” Labiche told SNA on Monday.

The competition in Durban, South Africa was part of Labiche’s attempt to reach 1.94 metres and qualify for the Olympic Games in Rio de Janeiro, Brazil from August 5-21.

The 23-year old athlete from the Seychelles, an archipelago in the western Indian Ocean, is still hopeful.

“Yes my hope is still high, and I have until 10th July to qualify,” says Labiche.

The closest Labiche has got to meeting the Olympic qualifying height is 1.92 metres, which is also a national record, established in the South African Open Championship in May last year.

Labiche, the Seychelles’ sports lady of the year 2015, told SNA that she doesn't have any other international competition planned at the moment.