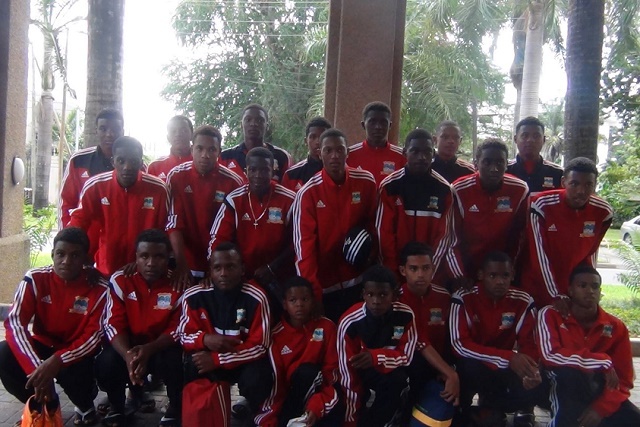 The Seychelles under 17 team before leaving to play the first leg of the Africa Cup of Nations 2017. (Gavin Jeanne)

(Seychelles News Agency) - A lack of experience led to the 3-0 loss to Tanzania by the Seychelles under 17 football team in the first leg of the Africa Cup of Nations 2017 competition on Sunday, the coach said Tuesday.

“It was a difficult match for us especially when you look at the age of our players. They have no international experience and have not played at that level before, and the match was a lot higher than their expectations,” said Jeanne.

Jeanne said although other players were called up for the team, some could not make it for training for various reasons.

Tanzania, with their more experienced players, took control of the match from the first half leading 2-0 at the break with goals from Ibrahim Abdallah and Clement Kibbabage.

The eastern African team sealed their victory from the penalty spot to end the encounter 3-0.

The team from the Seychelles, a group of 115 islands in the western Indian Ocean, will have another chance against Tanzania in the second leg on July 2 on home ground at Stad Linite.

In the last edition of the competition in 2015, Seychelles went out in the qualifying round in 2014, losing on aggregate 5-1 to Uganda.

Coach Jeanne believes that for better results in future competitions players need to be prepared well in advance.

“If we want results and do better at this level we need to start preparing the players at an early age and give them the international experience,” Jeanne said.

The qualifying matches will be played between June and October and at the end seven teams will join host Madagascar on April 2-21 next year.

Sport » Be a reporter: Write and send your article » Subscribe for news alert
Tags: under 17, football, Africa Cup of Nations 2017, Gavin Jeanne