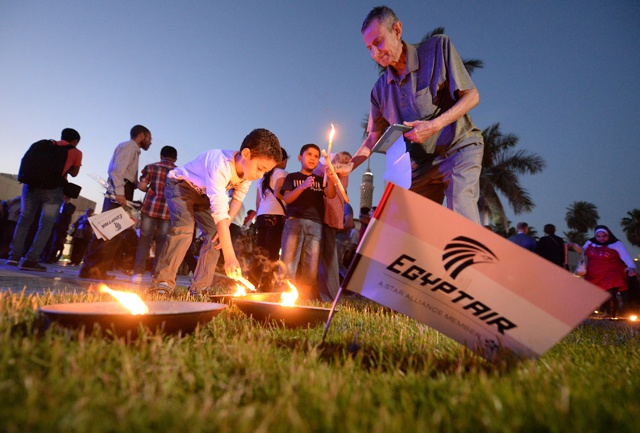 Egyptians light candles during a candlelight vigil for the 66 victims of the EgyptAir MS804 flight that crashed in the Mediterranean Sea, at the Cairo Opera House in the Egyptian capital on May 26, 2016. Data from one of the black boxes of a crashed EgyptAir plane showed smoke alarms had sounded on board, while soot was found on the wreckage. (KHALED DESOUKI / AFP)

(AFP) - Data from one of the black boxes of a crashed EgyptAir plane showed smoke alarms had sounded on board, while soot was found on the wreckage, an Egyptian-led investigative committee said Wednesday.

The black box had been retrieved from the bottom of the Mediterranean after the Airbus A320 with 66 people on board plunged into the sea on May 19 while heading to Cairo from Paris.

It had recorded the flight's data from its departure until it "stopped at an altitude of 37,000 feet (11,250 metres)," the committee said in a statement.

"Recorded data is showing a consistency with ACARS messages of lavatory smoke and avionics smoke," it said, two days after the damaged recorder was repaired in France.

Investigators had previously announced that the plane's automated Aircraft Communications Addressing and Reporting System (ACARS) sent signals indicating smoke alarms on board the plane before it went down.

"Parts of the front section of the aircraft showed signs of high temperature damage and soot," the committee statement added.

Egyptian investigators had confirmed that the aircraft had made a 90-degree left turn followed by a 360-degree turn to the right before hitting the sea.

The repair work of the cockpit voice recorder, the second black box, was underway at the France's BEA air safety agency.

The device had been found broken into pieces but salvage experts managed to retrieve the recorder's memory unit, Egypt's civil aviation ministry had said.

The committee statement said the search remained for the remains of the passengers and crew.

It "will continue till the full recovery of all the remains at the crash location," it said.

Both Egyptian and French judiciary have opened investigations into the mysterious incident, without ruling out that it had been deliberately downed.

The crash follows the bombing of a Russian passenger over Egypt's restive Sinai Peninsula last October, killing all 224 passengers and crew.

Egypt's aviation minister had initially said an attack was the more likely explanation, but President Abdel Fattah al-Sisi said there was no theory being favoured yet.

EgyptAir said last week advance compensation payments of $25,000 will be offered to families of the 66 people killed in the crash.

The payments are separate to those expected from insurance companies on behalf of various parties depending on the investigation into the disaster.