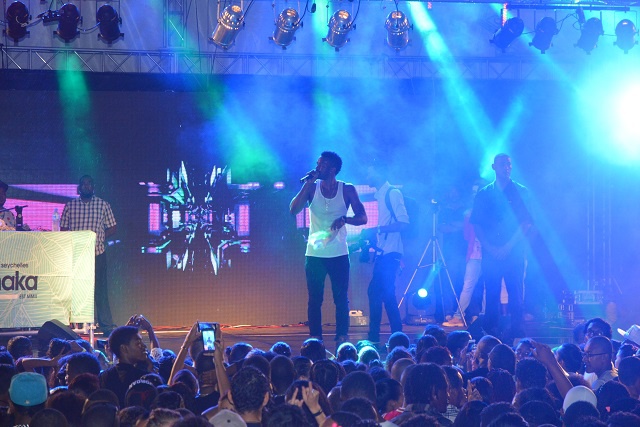 Konshens kept his appointment with local fans who had feared he would cancel his live performance in Seychelles after the death of his brother, who was also supposed to make the trip.

He wowed the big crowd with his dancehall and soca tunes, performing some of his well-known songs including ‘Bruk off yuh back,’‘Gal a Bubble,’ ‘Show Yourself,’ and ‘Couple Up’ among others.

Konshens, 31, did not make any direct comments or reference to his older brother ‘Delus,’ who shot himself last week. He however used his one hour performance to share some inspirational quotes with the crowd.

In spite of the drizzle fans who had filled up the Mini Stadium in the Seychelles capital, Victoria, stayed until the end.

“The show was interesting and lively when Konshens was performing but his performance was a bit too short,” said resident Diane Luc De Speville.

“In other countries when an artist performs, we see more of the artist rather than those who are featuring in the show, but in Seychelles this is not the case so that was a bit disappointing,” she added.

“To be honest Konshens gave a good show, but I enjoyed Charly Black’s show more,” said Gino Albert, adding that Charly who performed in Seychelles in May “had more hype and connected better with the crowd.”

“I had a blast and I would say this was one of the best show I have been to,” Elluna Constance said to SNA, adding that the organizers delivered their best despite some hiccups.

“It was ok, but I’m disappointed with him singing only parts of the songs, not to mention he sang for only an hour,” said Myra Labiche.

Konshens, born Garfield Spence, has been in the music industry since 2005, starting off as a DJ moving on to become a singer, record producer and businessman.

His first performance in Seychelles on the eve of the country’s independence day was made possible by Ti Kim Production led by local artist Stephen Eliza, known as Elijah, with the support of the island nation’s Tourism and Culture Ministry.

The show by Konshens was the third by international artists lately. Aside from the other Jamaican star Charly Black end of May also saw a performance by a Ugandan duo, Radio and Weasel.

The organizers have hinted at plans to bring in another popular international artist to perform in the Seychelles soon, but the details have been disclosed yet.