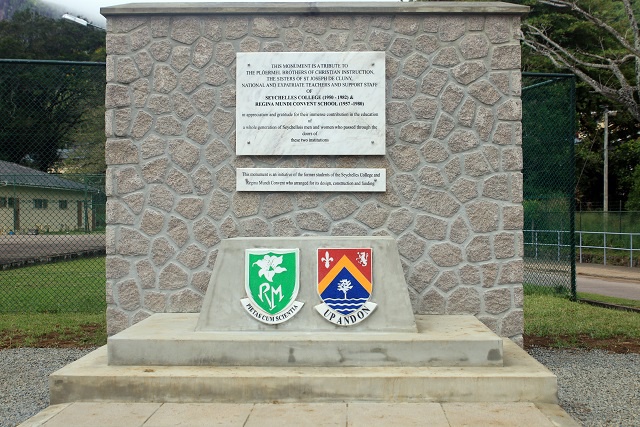 Past students have contributed to the design and build of the monument funded through money raised by the Regina Mundi Convent and Seychelles College (RMSC) Alumni. (Joe Laurence, Seychelles News Agency)

(Seychelles News Agency) - The Seychelles College and the Regina Mundi Convent, two former educational institutions, were recognised for the roles they played in the country’s educational development with the unveiling of a monument in their honour.

The plaque was unveiled on Wednesday, June, 29 when Seychelles celebrated the 40th anniversary of its independence in an emotional and sentimental ceremony where many of the past students were present.

Bernadette Larue, one member of the organising committee, said that the monument represents the sentiments that former students have deep in their hearts of memorable years spent at these two institutions.

“This was a big part of my life where I spent years of being educated, disciplined, grew in maturity and wisdom to become who and what I am today,” said Larue.

Another past student who was also a former Seychelles’ Minister for Agriculture and Land Use, Dolor Ernesta said, “it is significant to pay tribute and ensure that this legacy takes it rightful place in the form of a monument.”

According to the chair of the organising committee, Radley Webber, the initiative for the monument came from the former students when they formed the Regina Mundi Convent and Seychelles College (RMSC) Alumni in 2010.

“It started from an earlier group of the original committee. But lacking the funds to build the monument, they transferred the remaining funds from their previous accounts to the new committee which I chaired, and we have continued,” said Webber.

Additional funds were obtained through fundraising activities, and past students contributed in its design and build.

The Seychelles College, originally an all-boys’ school, and the Regina Mundi girls school were opened in 1950 and 1957 respectively as part of the educational reform plan of Walter Giles, the director of education at that time.

Both schools required an admittance fee, but the bursary programme for the less fortunate children with academic abilities gave others the opportunity to join through the national entrance examinations.

Ally adds that: “It was a great institution, and it is very fitting that this falls on the 40th anniversary of our independence.”

Both institutions were closed in the early 1980s after a comprehensive review of the education system in Seychelles, an archipelago in the western Indian Ocean when education became free and compulsory and children had to attend schools in their districts.

The two buildings now house the Seychelles Ministry of Education and the Mont Fleuri Secondary school.