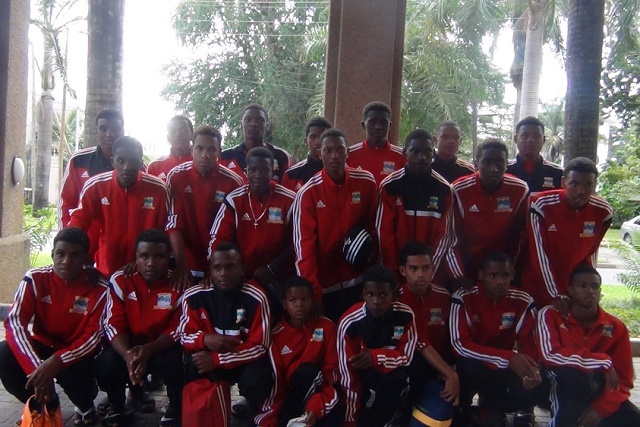 File Photo: The Seychelles under 17 team before leaving to play the first leg of the Africa Cup of Nations 2017. (Gavin Jeanne)

(Seychelles News Agency) - The Seychelles under 17 football team is eliminated from the Africa Cup of Nations 2017 competition after losing twice to Tanzania in a week.

Already behind by 3-0 from the first match played in Tanzania on June 26, the boys had a tough time against the eastern African team on home turf Saturday conceding six goals, going out 9-0 on aggregate.

Seychelles’ coach Gavin Jean told SNA that the boys had simply not recovered from the intensity of the first match.

“Our performance was not bad in the beginning, but the boys who were yet to recuperate from the first match showed signs of exhaustion. They had no energy left to put up with Tanzania’s high-level performance,” said Jeanne.

He added that a week was not enough for his players to recover their strength to play in such an intense and high-level competition.

“Tanzania played much better in the first match, and we were able to keep up and put up a good performance but on Saturday it was really tough for them.”

Jeanne said now that the under 17 boys are out of the competition, they will go back to their respective clubs, but he still believes that a programme needs to be developed for them to gain more international experience.

“If we don’t give them this exposure, we will keep getting the same results in such competitions. They need to have more practice playing at this level before participating in a high level competition,” said Jeanne.

Sport » Be a reporter: Write and send your article » Subscribe for news alert
Tags: Africa Cup of Nations 2017, football, Gavin Jeanne, under 17