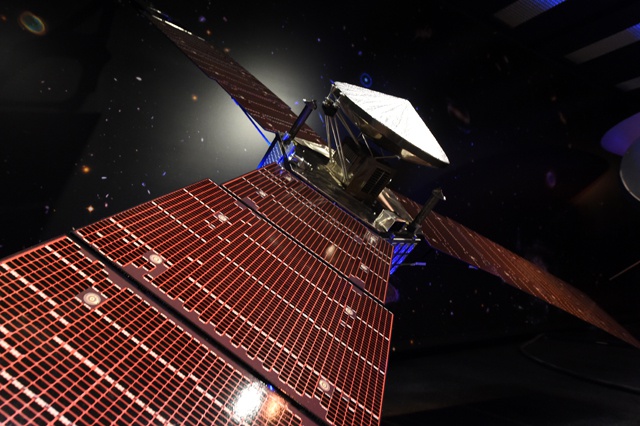 (AFP) - NASA celebrated a key triumph on Tuesday as its $1.1 billion Juno spacecraft successfully slipped into orbit around Jupiter on a mission to probe the origin of the solar system.

NASA's Jet Propulsion Laboratory in Pasadena, California erupted in cheers as the solar observatory successfully entered its aimed-for orbit around the biggest planet in our cosmic neighborhood at 11:53 pm (0353 GMT Tuesday).

"We are in it," hollered Scott Bolton, NASA's principal investigator from the Southwest Research Institute in San Antonio, Texas.

"You are the best team ever," he told his colleagues at mission control. "You just did the hardest thing NASA has ever done."

Juno launched five years ago from Cape Canaveral, Florida and has traveled 1.7 billion miles (2.7 billion kilometers) since then.

The spacecraft was traveling at a speed of more than 130,000 miles per hour (209,200 kilometers per hour) when it fired its engines to slow down enough to be captured into Jupiter's orbit.

"We see the expected sharp shift upward in the Doppler residuals indicating that the engine has started," said an engineer at NASA's Jet Propulsion Laboratory, as applause filled the mission control room.

A tone from the spacecraft indicating the maneuver's success came right on time, 35 minutes later.

Scientists hope to find out more about how much water Jupiter holds and the makeup of its core in order to figure out how the planet -- and others in the neighborhood, including Earth -- formed billions of years ago.

The solar system's most massive planet is fifth from the sun.

With an atmosphere of hydrogen and helium, it is known for its Great Red Spot, a storm bigger than Earth that has been raging for hundreds of years.

The first mission designed to see beneath Jupiter's clouds, Juno is named after the Roman goddess who was the wife of Jupiter, the god of the sky in ancient mythology.

The NASA mission aims to orbit Jupiter from pole to pole, sampling its charged particles and magnetic fields for the first time and revealing more about the auroras in ultraviolet light that can be seen around the planet's polar regions.

Juno should circle the planet 37 times before finally making a death plunge in 2018, to prevent the spacecraft from causing damage to any of Jupiter's icy moons, which NASA hopes to explore one day for signs of life.

Although Juno will not be the first spacecraft to orbit Jupiter, NASA says its path will bring it closer than its predecessor, Galileo, which launched in 1989.

That spacecraft found evidence of subsurface saltwater on Jupiter's moons Europa, Ganymede and Callisto before making a final plunge into Jupiter in 2003.

NASA says Juno should be able to get closer than Galileo -- this time within 3,100 miles (5,000 kilometers) above the cloud tops.

Earlier Monday, Heidi Becker, senior engineer on radiation effects at NASA's Jet Propulsion Laboratory, described the close approach as going "into the scariest part of the scariest place... part of Jupiter's radiation environment where nobody has ever been."

A key concern has been radiation levels -- as high as 100 million X-rays in the course of a year, she explained.

Those high-energy electrons, moving at the speed of light, "will go right through a spacecraft and strip the atoms apart inside your electronics and fry your brain if you don't do anything about it," she said.

"So we did a lot about it," she added, describing the half-inch-thick layer of titanium that protects the electronics in a vault to bring the radiation dose down.

NASA shoots for the Moon, on its way to Mars