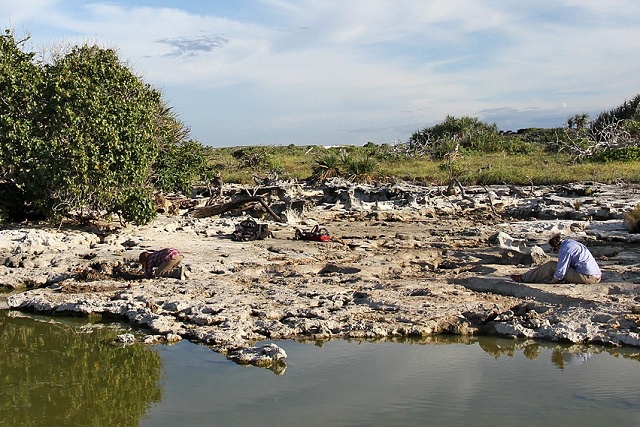 (Seychelles News Agency) - An ecologist working on the Seychelles most far-flung coral atoll stumbled upon a really old pair of crocs earlier this year, a discovery which could be the key to unlocking an evolutionary mystery.

What Dr Dennis Hansen chanced upon earlier this year is not the plastic footwear, which he says can sometimes sadly be found washed up on the shores of the atoll, but rather the fossils of two or more crocodiles.

In modern times, there have been no fearsome crocodiles roaming this giant atoll -- UNESCO World Heritage Site since 1982 -- located some 1,100 kilometres away from the Seychelles main island, Mahé.

Giant Aldabra tortoises and enormous coconut crabs are now the most dangerous things that might roam the coralline atoll’s jagged, otherworldly surface.

Dr Hansen – also a giant tortoise expert recounted how he way heading back to camp from working inland on the so-called ‘tortoise turf’, when he made the discovery. The crocodile fossils laid well hidden in a small pond of brackish water, usually full of sun-baked tortoises cooling down in it.

“The pond was more than halfway dried out, it being only the beginning of the wet season, so parts of the coral stone previously unseen were laid bare,” Dr Hansen told SNA. “And they were filled with treasures! Fossils, fossils everywhere!”

Frustratingly, though, the fossils were firmly embedded in the stone, and Hansen could not remove any of them without running the risk of destroying them, so he took some photographs and marked the spot with his GPS. But then, setting off to walk back to the hut, he crossed a slightly higher dry point of the pond, a small level patch covered in dried mud and loose soil.

“I spotted what I thought to be a large tortoise bone fossil lying directly on the surface. Picking it up, it looked a bit more weathered than the ones we usually see, embedded in the stone,” he said. “I turned it around, and froze when I spotted the row of large, circular hollows on the other side [I realised] this was not tortoise bone, but a good chunk of the lower jaw of a crocodile!”

Any nearby witnesses - probably a couple of tortoises trying to have their quiet evening wallow in the pond - would have seen plenty of jumping around and heard a lot of happy swearing, recalls Dr Hansen.

Going back to the pond next day with other members of the Zurich-Aldabra Research Platform (ZARP) expedition, the researchers sifted through other loose fossil remains, and found more crocodile bones, including a crocodile vertebra, and a second, smaller crocodile jaw fragment, indicating the remains of at least two crocodiles.

A question of taxonomy

Dr Hansen is now trying to get university funding to ship the remains back to Zurich University where they can be cleaned and examined by palaeontologists. It is hoped the researchers can confirm the age of the fossils and the exact species of crocodile.

Once the necessary research has been completed, the fossils can be returned and exhibited at the Seychelles Islands Foundation’s soon-to-be-built visitor centre, Aldabra House and the Seychelles Natural History Museum.

Although the inner granitic islands of the Seychelles were reportedly heaving with enormous saltwater crocodiles when they were first explored and settled in the 1700s, they were quickly hunted into the history books, and nothing remains of their existence apart from some skeletal remains at the natural history museum and a few geographical names around the inner islands.

On Aldabra, however, no sightings of crocodiles have ever been reported, and the only previous research on Aldabra’s ancient crocodile population was based on very small fossil fragments.

The 2006 research by Christopher Brochu pointed to the crocodiles, which were called Aldabrachampsus, as being very small, or miniature, and horned. Brochu argued against them being endemic to the islands, saying it was more likely that they arrived from northern Madagascar, where a similar species, now also extinct, once lived.

Since Hansen’s jaw fragment is 12 centimetres long, compared to six centimetre-long specimen studied by Brochu, Hansen has queried whether Aldabrachampsus was in actual fact a dwarfed species, something that the paleontologists in Zurich will help to determine when they get the new specimens.

As to the future, Dr Hansen who is now no stranger to the fact that Aldabra has endless surprises and treasures is certain that Aldabra still holds many more secrets left to be uncovered.

“We have still only, literally, scratched the surface of the atoll's history. What would be most important is to get a more broad, atoll-wide coverage, both in space, e.g., east-west, and in time, by looking at rocks of different ages,” he told SNA.

“There are so many more fossil sites than those that have been described so far. By getting more quantitative data we can learn more about how Aldabra's fauna responded to sea-level change in the past, and perhaps use this to help manage Aldabra's ecosystem in the current bout of global change.”