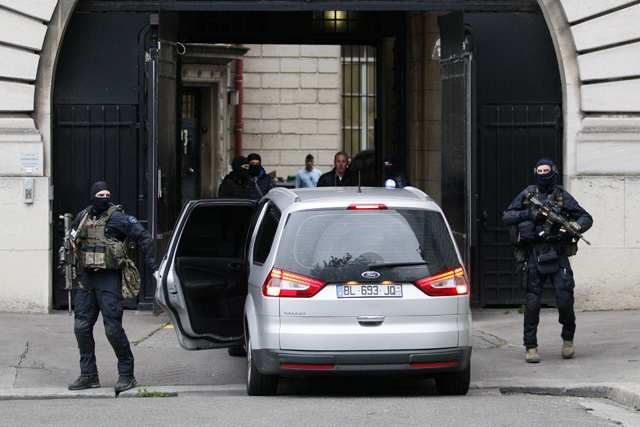 File Photo: French police and members of the National Gendarmerie Intervention Group (GIGN) escort a convoy transporting a surviving member of the group that carried out Paris terror attacks suspect Salah Abdeslam to Paris courthouse for his first questioning by anti-terror judges in Paris on May 20, 2016. (MATTHIEU ALEXANDRE / AFP)

(AFP) - A French inquiry into the terror attacks that rocked Paris in 2015 on Tuesday recommended the fusion of the country's intelligence services after the "global failure" of the country's myriad agencies.

The parliamentary inquiry was set up in February to probe possible security failings in the run-up to two major terror attacks in Paris in 2015 that left 147 people dead.

The president of the commission of the inquiry, Georges Fenech, said that the barriers between different intelligence services led to the surveillance of Charlie Hebdo attacker Said Kouachi being lifted.

The next time he was heard of was when he and his brother Cherif attacked the satirical weekly in Paris on January 7, killing 12 people.

Amedy Coulibaly, an ally of the brothers who took shoppers hostage at a Jewish supermarket two days later, killing four, and who also shot dead a policewoman, was also an example of intelligence failings within the prison system, the inquiry found.

Fenech recommended the establishment of a single "national anti-terrorism agency."

"Faced with the threat of international terrorism we need to be much more ambitious... in terms of intelligence," he said.

"Our country was not ready, now we must get ready," he told AFP.

Pietrasanta said that the intervention of security forces on the night of November 13 -- when a team of Islamic State gunmen and suicide bombers struck bars, restaurants, the national stadium and Bataclan concert hall, killing 130 -- had been "fast, effective and showed they were capable of working together."

However, he questioned the merits of having three different specialised units, the paramilitary intervention group GIGN, the police unit RAID and another elite police force specialising in hostage situations, the BRI.

Pietrasanta said that even though there had been threats made against the Bataclan concert, where 90 people were massacred, the attack there could not have been avoided.

"Thwarting the attacks would have presumed that investigators and intelligence agents had kept in mind all the targets mentioned by terrorists during their hearings," he said.

The commission was formed at the request of the conservative opposition Republicans party, to examine "the resources put in place by the state to fight terrorism since January 7, 2015".

The lawmakers held 200 hours of hearings.

The inquiry also found that the state of emergency imposed after the attacks and deployment of thousands of troops to patrol the streets had had only a "limited impact" on security.

"The state of emergency had an impact but it seemed to quickly diminish," Socialist lawmaker Sebastien Pietrasanta said of the measure, which is still in place nearly eight months later.

The inquiry also questioned the "real added value" of Operation Sentinelle, under which thousands of soldiers were deployed to protect schools, synagogues, department stores and other sensitive sites.