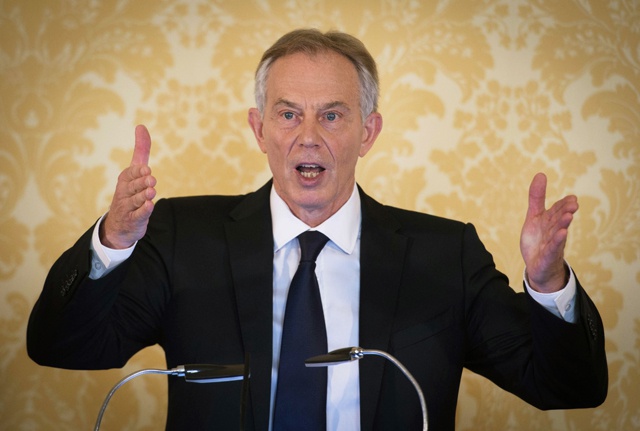 Former British Prime Minister Tony Blair addresses a news conference in London on July 6, 2016, following the outcome of the Iraq Inquiry report. Former British prime minister Tony Blair voiced "sorrow, regret and apology" after a damning report on the Iraq war Wednesday, but said he did not mislead parliament and did not regret toppling Saddam Hussein. (Stefan Rousseau / POOL / AFP)

(AFP) - Former British prime minister Tony Blair on Wednesday defended his case for going to war in Iraq, after a long-awaited report found the 2003 invasion was based on flawed evidence and woefully executed.

The hugely anticipated Chilcot report offered a damning verdict on Britain's role in the US-led war, detailing the flawed intelligence, questionable legal basis and inadequate preparation for the occupation.

Britain deployed troops before diplomatic options had been exhausted and at a time when "there was no imminent threat from Saddam Hussein", the Iraqi leader, the report found.

It also highlighted how Blair wrote to US president George W. Bush in July 2002, the year before the invasion, saying: "I will be with you, whatever."

Blair mounted a passionate defence of his decisions in a two-hour press conference, telling reporters: "I believe we made the right decision and the world is better and safer".

His voice cracking with emotion, Blair said he had "more sorrow, regret and apology than you may ever know or can believe" for mistakes in the planning of a war that deeply divided Britain.

Newspaper front pages were scathing, with The Times describing it as "Blair's private war" and the Daily Mail calling the former prime minister: "A monster of delusion".

Some 150,000 Iraqi people were killed in the six years after British and American troops invaded, plunging the country into chaos and creating fertile ground for jihadist groups like the Islamic State.

In Iraq, still wracked by violence and reeling from a suicide bomb that killed at least 250 people in Baghdad this week, the findings counted for little.

"The report... will not change anything -- all this is empty talk," said Zainab Hassan, aged 60.

The war was justified at the time by claims that Saddam had weapons of mass destruction, but they were never found and the intelligence was later withdrawn.

"There were no lies, parliament and cabinet were not misled, there was no secret commitment to war. The intelligence was not falsified and the decision was made in good faith," said Blair, who was prime minister for Labour from 1997 to 2007.

Bush also defended the invasion in a statement given through his spokesman, saying: "The whole world is better off without Saddam Hussein in power."

Relatives of some of the 179 British soldiers who died in Iraq said they would scrutinise the findings for possible grounds for legal action against Blair and other officials.

"The inquiry has confirmed all our fears that these young men and women were deployed on the back of a falsehood," said Roger Bacon, whose son Matthew, 34, died in 2005.

A cross-party group of MPs is also looking into the possibility of taking legal action against Blair, including in the International Criminal Court.

Judging the legality of the invasion was not in Chilcot's remit, but he said the process of deciding the legal basis for war was "far from satisfactory".

"We have concluded that the UK chose to join the invasion of Iraq before the peaceful options for disarmament had been exhausted. Military action at that time was not a last resort," he said.

"The invasion and occupation of Iraq was a catastrophe," Corbyn told families of British soldiers who died.

"I now apologise sincerely on behalf of my party for the disastrous decision to go to war in Iraq."

The war, which at one point saw 46,000 British troops deployed, still looms large over British politics.

Britain's scarring experience in Iraq has made it deeply wary of committing ground troops to international military interventions in countries like Syria and Libya.

Retired civil servant Chilcot said his report was "an account of an intervention which went badly wrong, with consequences to this day".

In a statement to the House of Commons, Prime Minister David Cameron said: "We cannot turn the clock back but can ensure that lessons are learned and acted on".