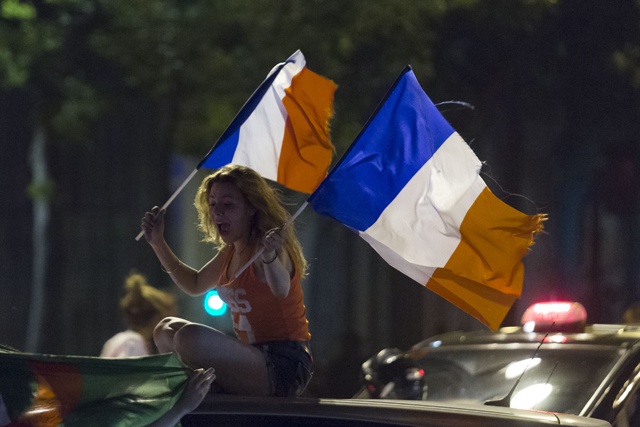 (AFP) - France has rediscovered its love for the national football team after years of scandal and disappointment.

Antoine Griezmann's two goals that saw France to a landmark 2-0 win over Germany in the Euro 2016 semi-final set off football fever that has not been seen since the country won the World Cup in 1998.

Tens of thousands took to the streets of Paris after Thursday's win in celebrations that were partially tainted by clashes with riot police on the Champs Elysees.

There were 90,000 people in a fan zone under the Eiffel Tower and tens of thousands more in front of giant screens in cities around the country.

"The support of the people is extraordinary," said France coach Didier Deschamps.

"Before we came to the stadium we saw people going crazy -- they are going to be even crazier on Sunday," he added. France will meet Cristiano Ronaldo's Portugal at the Stade de France on Sunday.

Last weekend, before France's 5-2 victory over Iceland in the quarter-final, the players climbed over advertising hoardings behind a goal to applaud the home supporters in Paris.

"It's the first time I have seen that since 1998," said Herve Moquet, president of the Picards Foot supporters' club.

"You feel the difference in the behaviour of the players," added Herve Mougin, head of another fan group. "Before, this team had trouble expressing joy and communicating with the fans."

The European Championship has enabled the France squad to redeem their image, after the uproar that has never been far away in recent years.

The players went on strike at the 2010 World Cup following a dispute between striker Nicolas Anelka and the manager of the time Raymond Domenech.

He is now excluded from the squad.

Tragedy struck France days later. Militants who staged attacks that left 130 people dead across Paris on November 13 sent suicide bombers to the Stade de France where France were playing Germany in a friendly.

The country has been in a state of emergency ever since.

Deschamps' squad has somehow remained focused on football, building up a groundswell of support that is starting to resemble the 1998 World Cup-winning campaign with Zinedine Zidane at the heart.

Relations between the team and the public tailed off after that historic win over Brazil. Dealings with fans became frosty and complex, often at the mercy of federation politics and the wishes of respective coaches.

Moquet points to the arrival of Noel Le Graet as French Football Federation president in 2011 as a turning point.

Before that opening up to supporters had not been a priority for the FFF.

In South Africa in 2010, Domenech opened training sessions and sometimes the team hotel to the public, said Mougin.

But the squad strike ensured such access to players was soon cut off.

Le Graet's election as FFF president helped foster a better understanding and the appointment of Deschamps further improved links with the public.

The start of the reconciliation was seen in the rousing reception France received during a World Cup play-off match against Ukraine in November 2013. They had to win to qualify for Brazil and did 3-0.

"When I entered the ground and I felt the atmosphere, I knew that we couldn't lose," said Patrice Evra, who was captain of the French team that returned home from South Africa in disgrace.

Paul Pogba was among those to salute supporteers at the Stade Velodrome on Thursday, and Les Bleus will be relying on more of the same when they bid for a record-equalling third European crown this weekend.

"It's great, it's crazy. Look at all the people here to support us, it's magnificent," he said.