Snipers kill four police at US protest over shootings 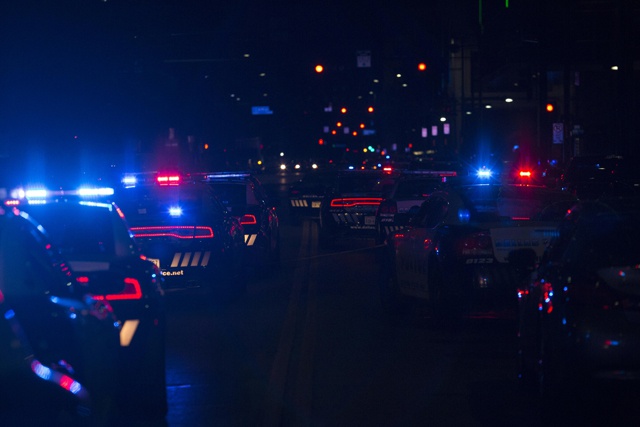 Police cars sit on Main Street in Dallas following the sniper shooting during a protest on July 7, 2016. (Laura Buckman / AFP)

(AFP) - Four police officers were killed and seven others wounded by snipers in chaotic scenes in Dallas during a protest against police shootings of black men, with a suspect warning that bombs were planted throughout the city center.

Police were continuing to exchange gunfire with a suspect holed up in a downtown garage hours after the shooting started.

The suspect "has told our negotiators that the end is coming, and he is going to hurt and kill more of us, meaning law enforcement. And that there are bombs all over the place in this garage and in downtown," Brown told reporters.

A woman who had been in the same part of the garage was also in custody, along with two suspects who had camouflage bags in a Mercedes and a person of interest who turned himself in after police tweeted a picture of him wearing camouflage and an assault rifle slung across his shoulder.

It is legal for those with permits to openly carry weapons in the state of Texas.

"We still don't have a complete comfort level that we have all the suspects," Brown warned.

Several hundred people attended the Dallas rally, which ended just before the shots rang out around 9:00 pm (0200 GMT Friday).

The protest was one of several nationwide over the fatal police shootings of black men in Minnesota and Louisiana this week that have prompted US President Barack Obama to make an emotional appeal for urgent police reform.

The Federal Aviation Administration restricted 2.5 nautical miles of airspace over the city, saying "only relief aircraft operations under direction of Dallas Police Department are authorized in the airspace."

In a poignant moment, Rawlings spoke of a "heartbreaking morning" for the city.

"We as a city, we as a country, must come together, lock arms and heal the wounds that we all feel from time to time. Words matter. Leadership matters at this time," he said.

Brown initially said two of the officers were undergoing surgery and three were in critical condition. The condition of the other officers was unclear.

"Ambush," read a headline in The Dallas Morning News, above a photograph of a woman comforting a police officer.

Dramatic video of the shooting emerged from witnesses, who posted the footage online. Bursts of gunfire and police sirens could be heard in the videos.

"Then he turned around, you know, checked his back. Made sure no one was coming but the officer did come across the right side of the screen to the pillar of the right, and the officer did try to take him and it didn't end well. It just ended very tragically.

"It looked like an execution, honestly. He stood over him after he was already down. Shot him maybe three or four more times in the back."

In another video, posted by Twitter user @allisongriz, one witness can be heard saying: "Oh, my God. There are people laying on the ground. I hope they're just hiding."

Another witness says: "Somebody is really armed to the teeth. This is not just one person."

The Twitter user who posted the video said she filmed it from her living room.

The deaths of Alton Sterling in Louisiana and Philando Castile in Minnesota are once again fueling a debate about police use of lethal force, especially against blacks.

Castile's girlfriend Diamond Reynolds livestreamed the aftermath of Wednesday night's shooting in a Saint Paul suburb with an officer pointing his gun at her through the window as her four-year-old daughter sat in the back of the car.

The 10-minute video -- which shows Castile bleeding profusely -- prompted widespread outrage and has been viewed millions of times after it was posted on Facebook.

Obama, America's first black president, said it was clear the shootings were not "isolated incidents."

Words of support and concern came pouring in as the situation unfolded in Dallas.

"As this situation continues to unfold, I'm praying for the brave men and women of the @DallasPD and those in downtown Dallas," Republican Congressman Pete Sessions said on Twitter.

But criticism of the civil rights movement Black Lives Matter was also swift.

"This is now war. Watch out Obama. Watch out black lives matter punks. Real America is coming after you," former Republican congressman Joe Walsh wrote in a tweet that was later deleted after he came under heavy criticism for his comments.