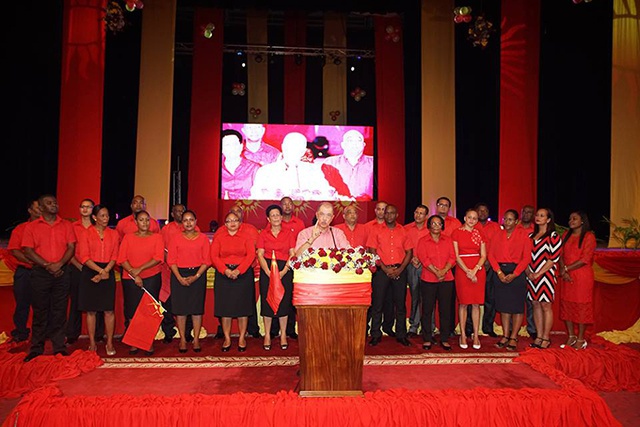 (Seychelles News Agency) - The Seychelles ruling Parti Lepep has confirmed its list of candidates and launched its campaign ahead of upcoming parliamentary elections to be held in the island nation later this year.

Nominations of the party’s 25 candidates were approved Friday evening during an extraordinary congress at the International Conference Centre in the Seychelles capital, Victoria.

The president of Parti Lepep -- also the Seychelles President, James Michel -- said the candidates represent a mixture of youth, wisdom and experience, adding that he has no doubt his party will come out victorious and win a majority of seats in the assembly.

“A victory for Parti Lepep means more progress for the country. It means stability, change in continuity, it means maintaining order and peace, it means national unity, and more prosperity for all Seychellois,” he said.

When launching the party’s campaign themed ‘Nou pli determinen ki zanmen’ [we are more determined than ever] President Michel said Parti Lepep is ready for the next big challenge that lies ahead.

“We are ready and we have solid candidates to contest the upcoming elections,” he said while calling on the candidates to go out and remain connected to the people.

“Politics is a profound conviction to do what is good for your country. Politics is not a comfort zone, it’s not a platform to obtain power neither for personal ambitions. As candidates for the national assembly elections you need to win the hearts and soul of the people.”

The presentation of candidates was done in the presence of party officials and activists where it was announced that a series of public meetings will be starting on Sunday.

The ruling party had already presented a first list of candidates for the upcoming National Assembly elections as early as June last year at its 29th Congress.

There has been some change in the final line-up of 11 women and 14 men presented on Friday, with 10 new faces.

While some of the candidates are not new on the political scene with some having been in the assembly at one point in time, others are newcomers and will be contesting the parliamentary poll for the first time.

Only five among the 25 aspiring parliamentarians are members of the current national assembly.

The Seychelles National Assembly consists of 32 members, of which 25 are directly elected representing the 25 electoral districts in the country. Seven are proportionately elected.

The 2016 parliamentary poll is promising to be a completely different battle for votes with more opposition parties, including an alliance of four political parties having already announced their intention to field candidates and contest the elections.

Campaigning is likely to intensify in the coming days in the island nation as the Electoral Commission has said that new elections will be held anytime between June 11 and September 11 in accordance with the timetable set forth in the constitution.

The main opposition coalition, Linyon Demokratik Seselwa and other opposition parties are also likely to be presenting their final list of candidates in the near future.

The upcoming September elections will be the second time in less than a year that voters of the 15-island archipelago in the western Indian Ocean are called to the polls following a presidential election at the end of 2015.

President James Michel was declared the winner of a historic run-off with 50.15 percent of the votes and his rival, leader of the Seychelles National Party Wavel Ramkalawan won 49.85 percent with only 193 votes separating the two candidates.