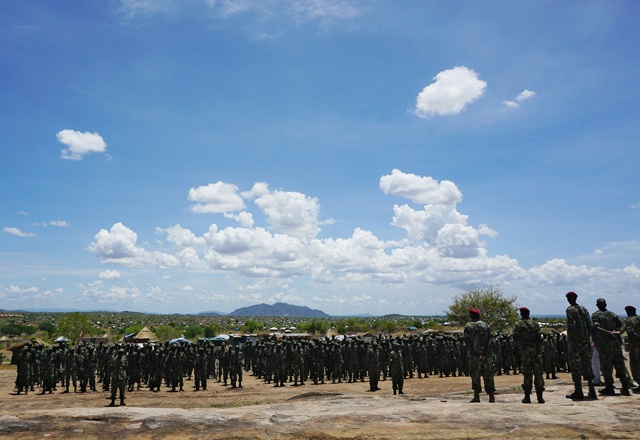 South Sudan government soldiers parade in a camp in Juba on April 21, 2016. This unit is part of a tightly controlled number of government and rebel units allowed in designated camps as part of a peace deal.(PETER MARTELL / AFP)

(AFP) - Gunfire erupted near the presidential palace in South Sudan's capital Juba on Friday, further straining a shaky ceasefire the day after five soldiers were killed.

President Salva Kiir and his deputy, former rebel leader Riek Machar, were both preparing to address the media at the compound when artillery fire broke out outside for around 30 minutes.

There was confusion as the shooting died down, with Kiir telling reporters: "What is happening outside is something we cannot explain to you."

James Gatdet Dak, a spokesperson for Machar, said in a statement, "the heavy fighting which erupted... has subsided".

"The two leaders are calling for calm, hopefully there will be calm," he said.

The fresh violence came just as the country, the world's youngest, prepares to mark its fifth anniversary of independence from Sudan on Saturday.

Five soldiers were killed in a shootout with former rebels on Thursday in what was believed to be the first clashes between the two sides in the capital since peace deal in August last year.

Two other soldiers were also wounded in the shootout at a checkpoint in the city's Gudele neighbourhood, said army spokesman Lul Ruai Koang.

Gudele was the scene of tribal massacres when South Sudan's civil war broke out in December 2013.

Machar spokesman Nyarji Roman said the shooting began when two vehicles used by Machar's bodyguards were stopped by soldiers. He said two former rebels were also injured in the clash.

Koang blamed the former rebels for the "hostile fire," but insisted it was "an isolated incident".

A UN worker was also reportedly injured in a separate shooting and a US embassy vehicle was also shot at, according to Roman.

South Sudan's peace process has all but stalled, with hardliners on both sides uninterested in a negotiated settlement and the unity government mired in mistrust.

UN Secretary General Ban Ki-moon said he was "deeply alarmed" by the ongoing fighting in Juba, complaining of both sides' "lack of commitment to the peace process".

The UN leader also expressed concern that the violence was spreading to other areas "which could lead to the dramatic deterioration of the security situation across the country".

The South Sudanese people have suffered "unfathomable atrocities," he said.

Tens of thousands of people have died in more than two years of civil war, close to three million have been forced from their homes and nearly five million survive on emergency food rations.

The country is also facing an economic crisis with the currency collapsing and inflation spiralling out of control. South Sudan's mainstay oil industry is in tatters and regional towns have been razed.

Fighting has continued outside the capital, with the most recent serious clashes taking place in the town of Wau late last month.

The peace deal was supposed to end a civil war that began when Kiir accused Machar of plotting a coup.

But Machar did not return to the capital until April, and fighting has continued despite the establishment of a unity government.