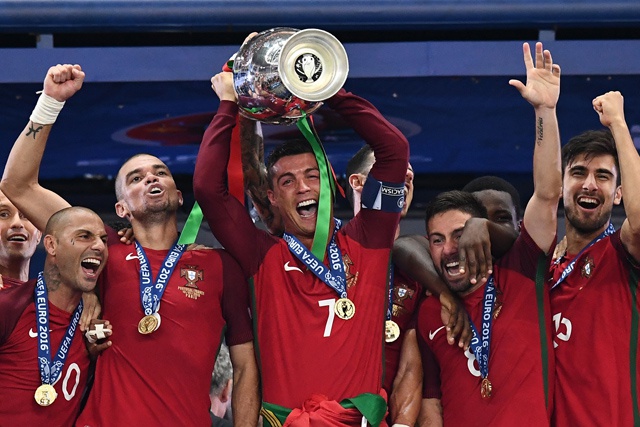 Ronaldo was stretchered off in tears in the first half and limped on crying with joy again after his side delivered the final knockout blow in the month-long tournament of upsets.

Hosts France dominated the game, as they had nearly every match since the start. But they could not break down a Portuguese defence in which man-of-the-match Pepe was majestic and goalkeeper Rui Patricio produced a string of dramatic saves.

"It was not the final I wanted but I am very happy. It is a trophy for all Portuguese, for all immigrants, all the people who believed in us so I am very happy and very proud," said Ronaldo.

Up against a French team with a whole nation behind them, Portugal healed their own football wound from a shock they suffered twelve years ago. In the 2004 Euro final, Portugal lost to Greece 1-0 on home territory.

Portugal can now expect a momentous national welcome when they return to Lisbon and a tickertape parade through the capital on Monday.

Portugal's coach Fernando Santos and the other players paid tribute to Ronaldo's role in urging the team not to give up in the tense match at the Stade de France. Ronaldo returned from treatment at the end of 90 minutes to give pep talks to his teammates.

He fell the ground in agony in the eighth minute following a clattering challenge from Dimitri Payet. After twice going off for treatment and trying to come back, Ronaldo was definitively carried off.

"He told me I was going to score the winning goal," said Eder who plays for French side Lille and only went on in the 79th minute. "He gave me strength and positive energy."

Victory also gave Ronaldo energy. He danced past reporters with other Portugal players as they left the stadium.

"Cristiano is fundamental to us," said Santos. "It would be utopian to not use Ronaldo and all his added value.

"Cristiano could score at any moment and sort everything out on his own but I always said we are a team -- we win as a team."

Portugal defended doggedly and threatened occasionally without their inspirational skipper. With 109 minutes gone, Eder beat off a Laurent Koscielny challenge to fire a shot from outside the penalty area that French captain and goalkeeper Hugo Lloris could not even get a hand to.

The tournament featuring 24 teams for the first time failed to produce classic football. And Lloris was the latest to raise questions about the manner of Portugal's wins.

"If they won the tournament it is because they deserved it," Lloris said.

But he described France's luck as "cruel" and added "one can always argue about the way they play, but they are efficient and you must congratulate them."

Santos had always said he does not care if Portugal win "ugly" as long as they win.

The 51 games produced 108 goals, one of the lowest averages for recent international tournaments. The quality was not memorable. But the upset results will go down in history.

Iceland stunned England 2-1, Wales beat Belgium 3-1 in a classic quarter-final and Portugal will long celebrate their win in a stadium that was invaded by swarms of moths.

France started the match as strong favourites after beating Germany 2-0 in the semi-final. Antoine Griezmann scored twice in that game to take his tournament total to a Golden Boot winning six goals.

But the striker who has spent his entire career in Spain and has never played in the French league could not penetrate the Portugal defence. His early header drew a finger-tip save from Rui Patricio. Griezmann said defeat had been a double blow as he also missed a penalty in Atletico Madrid's defeat to arch-rivals Real Madrid in the Champions League final seven weeks ago.

Moussa Sissoko also drove a thundering shot over the bar while French substitute Andre-Pierre Gignac sent an extra time shot against the post.

"The disappointment is there and it's immense," French coach Didier Deschamps said. "We've let a big chance to be champions pass us by."

Deschamps contract runs until 2018 and the World Cup in Russia. He said he would take time to "digest" the disappointment before thinking about his own future.

France spent 450 million euros ($500 million) preparing 10 stadiums for Euro 2016 which could be the last hosted in one country. Euro 2020, the 16th tournament, will be held in 13 cities in 13 different countries from Azerbaijan to Wales.

Despite some doubts about the 24-country format, UEFA's executive committee "praised the competitiveness of the competition" in a statement after a meeting on Saturday.