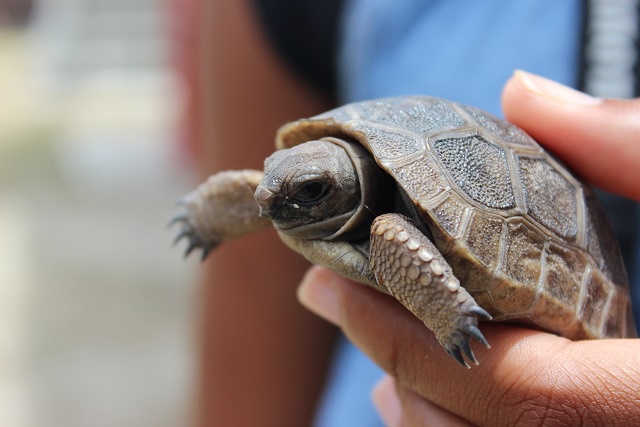 File Photo: A baby giant tortoise on Curieuse Island. The Seychelles National Park Authority and other conservation partners on the island have reported the theft of 25 such baby tortoises. (Seychelles News Agency)

(Seychelles News Agency) - The Seychelles National Park Authority and other conservation partners on Curieuse Island said they are dismayed over the theft of a large number of baby giant tortoises.

Allen Cedras, an officer of the Seychelles National Park Authority, told SNA on Monday that: “We had 28 babies and 25 of them have been stolen.”

“My first reaction was anger, I was really mad but then came disappointment. These babies of several months to four years were the product of our hard work and monitoring,” said Cedras.

He added that the Seychelles National Park Authority and its partners which include the Global Vision International, a volunteer program based on the island, are dismayed over this loss.

“We are disheartened but will not give up even though it now means starting all over again.”

The theft was reported on Friday by rangers living on Curieuse.

Cedras, who grew up on Curieuse and worked there for several years, said this is the first time that such a large number of land tortoises have been stolen from the island.

He said this might be largely due to the demand for baby giant tortoises which are sold by private owners for about $200 to nearly $400 each.

The tortoises are exchanged as wedding gifts, eaten and more common today kept as pets in households or tourism establishments.

Two of the babies that were left behind had an electronic tag on them which would have helped the Seychelles Police in the on-going investigation.

Curieuse, a former leper colony, was turned into a National Park in 1979 and has 128 land tortoises, making it one of the largest populations in Seychelles, an archipelago of 115 islands in the western Indian Ocean.

These reptiles, as well as its forest of coco-de-mer palms and pristine beaches, are part of several attractions for tourists visiting Curieuse.

The island’s proximity to Praslin, the second-most populated island of Seychelles located only 15 minutes away, have always been a hindrance to several of its conservation projects.

“We have had several hotels and individuals who had in the past approached us to buy the babies,” said Cedras, adding that land tortoises that are in captivity have low breeding successes.

This has prompted the island to start an intensive breeding programme to increase the tortoises’ population.

However, with the risk of predators and poaching of baby tortoises, security has been intensified over the past four years. Visitors can only see the tortoises through well-meshed cages until they are fully grown.

“We have strict measures in place to protect the small tortoises, and their pen is located not far from the ranger’s house. We just hope we will be able to find at least some of them,” said Cedras.

Curieuse was until now used as a refuge for this species which can weigh more than 400 kilogrammes and can live for over 80 years.