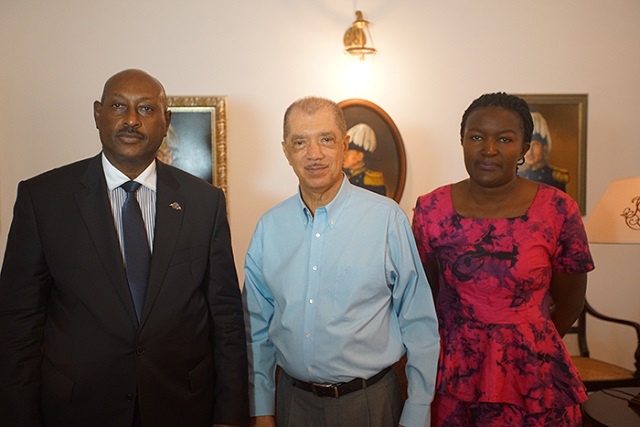 The Ugandan presidential envoy for the country's campaign for the chair of the African Union Commission Frederick Ruhindi (left) during his meeting with the Seychelles President James Michel at State House on Tuesday. (Mervyn Marie, Seychelles News Agency)

(Seychelles News Agency) - Uganda is lobbying Seychelles to support its bid to take over the chairmanship of the African Union Commission.

The Ugandan presidential envoy for the campaign met with the Seychelles President James Michel at State House on Tuesday.

Frederick Ruhindi said the East African nation is seeking the archipelago’s support for Uganda’s former Vice President Dr Specioza Naigaga Wandera Kazibwe to become the next head the regional organisation for the 2016-2020 period.

“I believe Africa has a gift in this lady and we hope to get the necessary support for her to be the next chairperson the African Union Commission,” Ruhindi told journalists.

Dr Kazibwe who has held several ministerial posts has a doctorate in socio and economic matters and is also a medical doctor and surgeon. She has also been a UN special representative on HIV/AIDS.

The current Chairperson of the African Union Commission, Dr Nkosazana Dlamini-Zuma -- a former South African minister and also the first woman to lead the organization -- is stepping down after completing her four-year mandate.

Ruhindi explained that the East Africa region decided to field a candidate for the post, as North Africa, which was next in line, did not do so.

Seychelles is among the 20 countries that make up the East Africa region.

Botswana and Equatorial Guinea have also nominated candidates for the post. The new chairperson will be elected during the 27th African Union Assembly, to be held in Kigali, Rwanda on July 17 and 18.

According to a State House statement, a high-level delegation will represent Seychelles at the summit.

The statement adds that the upcoming summit, the work of the African Union, the need to reform the UN Security Council, efforts to increase jobs for youth in Africa and tourism potential were among other issues president Michel discussed during his meeting with the Ugandan envoy.