China has 'no historic rights' in South China Sea: tribunal 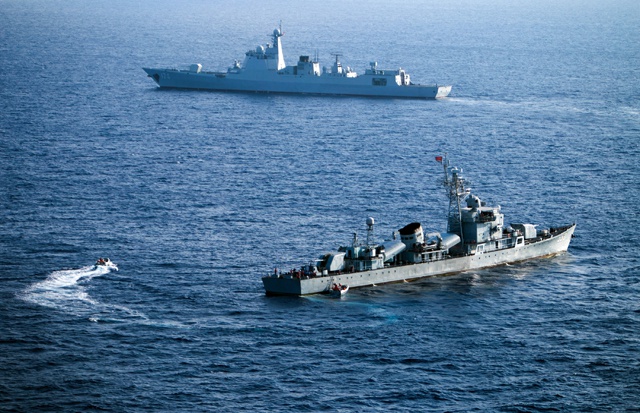 This file photo taken on May 5, 2016 shows crew members of China's South Sea Fleet taking part in a drill in the Xisha Islands, or the Paracel Islands in the South China Sea. (AFP Photo)

(AFP) - China has no legal basis to claim "historic rights" to islands in the South China Sea and has violated Manila's sovereign rights, an international tribunal ruled on Tuesday, in a bitter dispute that risks stoking further tensions in Southeast Asia.

"The tribunal concluded that there was no legal basis for China to claim historic rights within the sea areas falling within the 'nine-dash line'," The Hague-based Permanent Court of Arbitration said in a statement.

Manila -- which had lodged the suit against Beijing in 2013 -- welcomed the ruling but China reacted furiously, saying it "does not "accept and does not recognise" the decision.

Beijing had refused to participate in the case, saying the tribunal had "no jurisdiction" over the issue.

Beijing claims most of the South China Sea, even waters approaching neighbouring countries, as its sovereign territory, basing its arguments on Chinese maps dating back to the 1940s marked with a so-called "nine-dash line".

But in its hard-hitting ruling, the PCA said Beijing "had no historic rights to resources in the waters of the South China Sea" and that "such rights were extinguished to the extent they were incompatible with the exclusive economic zones provided for in the Convention", referring to the UN Law of the Sea.

"China had violated the Philippines' sovereign rights in the exclusive economic zone by interfering with Philippine fishing and petroleum exploration, by constructing artificial islands and failing to prevent Chinese fishermen from fishing in the zone," the PCA said.

The tribunal further ruled that the disputed Spratly islands "cannot generate maritime zones collectively as unit" as claimed by China.

Tuesday's judgement comes against the backdrop of frequent military brushes between China and its Asian neighbours the Philippines, Vietnam, Malaysia, Brunei and Taiwan, which ring the waters believed to hold untapped oil and gas reserves.

The tensions have also alarmed the United States which has key defence treaties with many regional allies, and in a show of strength last week sent warships to patrol close to some of the reefs and islands claimed by China.

New Philippine President Rodrigo Duterte had said he was optimistic of a favourable ruling, but offered to hold conciliatory talks with China and vowed he would not "taunt or flaunt" any favourable ruling.

Referring to the UN Convention on the Law of the Sea, Manila contended the "nine-dash" line had no basis under international law and that Beijing had no "historic" claim to the waters.