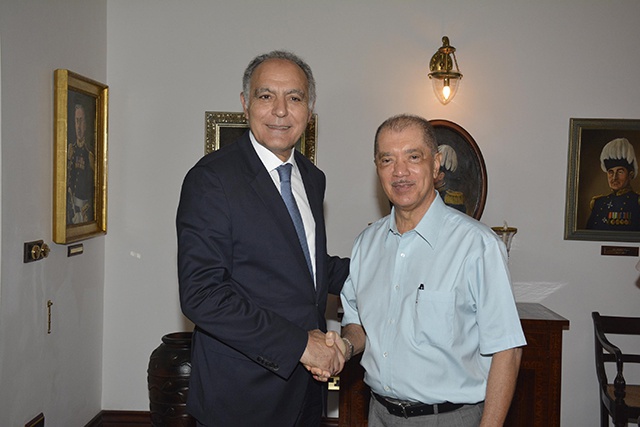 (Seychelles News Agency) - Seychelles has been invited to participate in the UN’s 22nd Conference on Climate Change (Cop22) in November in Marrakech, Morocco.

Morocco’s Minister for Foreign Affairs and Cooperation Salaheddine Mezouar on Wednesday presented an invitation to the Seychelles President James Michel at State House.

Mezouar told journalists that Morocco believes that Seychelles played an important role to ensure the successful outcome of the UN’s 21st Conference on Climate Change held in Paris last December.

During the Cop 21 meeting in France’s capital city, Paris, last December, the 195 participating countries adopted the first global agreement on climate change -- a binding treaty that aims to limit global warming to below 2 ° C.

Among other things the November meeting in Marrakech aims to commit parties for the entry into force of the Paris agreement.

"We have spent a lot of years to negotiate, to speak out and it’s now time for action,” said Mezouar.

Seychelles is considered to be among the world’s leaders in taking action to protect the environment. This is mainly due to the fact that the effects of climate change especially rising sea levels could have serious impacts on the island nation.

The Seychelles Foreign Affairs Minister Joel Morgan who was present at the State House meeting told journalists that Morocco also wants Seychelles, a 115-island archipelago in the western Indian Ocean, to take a lead role in ensuring that small island states come up with common projects in order to secure funding.

Morgan said that Seychelles has agreed to lead such an initiative and is currently planning where it will host a meeting of small island nations so that such a common endeavour could be properly defined.

Aside of the upcoming climate change meeting, Minister Mezouar also discussed other issues with President Michel. This includes a visa waiver for Seychelles nationals who visit Morocco -- a decision he says will take effect during the Cop 22 meeting.