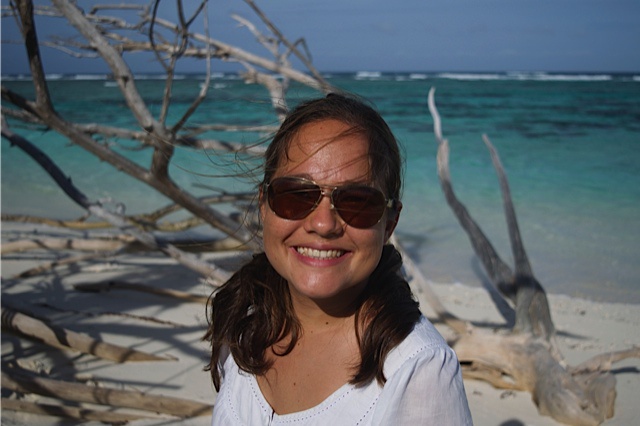 (Seychelles News Agency) - A Seychellois marine biologist is hopeful that in spite of the magnitude of recent bleaching incidents in Seychelles there is great hope that not all affected corals will die.

Karen Chong-Seng spent around eight months observing the resilience of the island nation’s coral reefs between August 2015 and April this year. Now back in Australia -- where she lives and works -- Chong-Seng, 31, is analyzing her findings and looks forward to having more opportunities to research the Seychelles marine environment.

The eldest of two siblings and hailing from Glacis – a northern district of the Seychelles main island Mahé, Chong-Seng talks with SNA by email about her passion for the sea and offers advice on how to better protect the coral reefs.

SNA: Hello Karen. First, talk a little bit about your recent studies of the latest bleaching incidences in Seychelles?

KC: I was in Seychelles between August 2015 and April 2016, working as the acting Science and Projects Programme Coordinator for the Seychelles Islands Foundation (SIF). During my time with SIF I spent four months on the Aldabra Atoll also coordinating the marine monitoring programme. Aldabra's coral reefs were bleaching in January 2016 compared to March/April for the inner islands. Following completion of my contract with SIF, I undertook a short consultancy in collaboration with the Seychelles Fishing Authority (SFA) to study the recent bleaching event around Mahé and Praslin (Seychelles main and second most populated islands).

SNA: What were the main findings?

KC:Bleaching has been reported from coral reefs globally over the last year - starting in the Caribbean and extending to the Hawaiian Islands, the Australian Great Barrier Reef, and elsewhere within the Indian Ocean (e.g. Kenya, Tanzania, Maldives, Reunion). The sites I surveyed were around Mahé -- west around Conception and Ile aux Vache, north-west between Baie Ternay and L'Ilot, east around Anse Aux Pins, St Anne and on Praslin around Cote d'Or and Grand Anse. Bleaching was observed at all 16 sites that were visited. All these reefs had previously been affected during the 1998 bleaching event.

SNA: Based on your knowledge of the previous bleaching events in 1998, how extensive is the bleaching this time around?

KC:At the time of the surveys, there was potential for the 2016 bleaching event to be as bad as the 1998 one - about the same proportion of corals were affected -- up to 95 percent of all corals on a reef. However, hopefully, not all of these corals will necessarily die. Corals live in a close relationship with some algae that live inside their tissues, depending on each other to survive. The current bleaching event is a result of unusually high water temperatures, which causes the relationship between the coral and their algae to break down. The algae leave the coral, taking away the coral’s main food provider and its colour. If the algae are only gone for a short time -- a matter of weeks, then there is the possibility that the corals will not starve, and will be able to recover. Given that the south-east trade winds seem to have now started properly, and the water temperatures gone down again, hopefully not all corals that were affected will die.

SNA: What else contributes to the bleaching process apart from unusually high temperatures?

KC:The current event is caused by the unusually high water temperatures, in this case, as a result of the El Niño weather phenomenon, however, the coral-algae relationship break down can also be caused by unusually cold temperatures, pollution, freshwater influxes e.g. from runoff or extreme low tides causing exposure to high solar irradiance and/or air. Bleaching is a way for corals to express that something is wrong and that they are in an unhealthy environment.

SNA: How long does it take for the coral reefs to replenish after the damage?

KC:This is very variable and depends on lots of different factors, including how badly damaged the reefs have been and how many other stressors the reefs are dealing with. Following the 1998 event, only 12 out of 21 studied reefs were recovered by 2011, so 13 years following the bleaching event - nine of them had been transformed to an area with very little coral. Bleaching is not a life-or-death sentence for the coral, but recovery will not be easy and may take a long time.

SNA: What can be done to help corals regenerate?

KC:The best thing that humans can do is to reduce the pressures we're applying to coral reefs. If corals have a clean environment to live in, they will be able to recover much better. Around the globe there are examples of coral reefs that have recovered much faster following a disturbance because they are more isolated (e.g. Chagos or Scott Reef in Western Australia) and therefore had fewer human-related threats. Coastal development, while necessary, needs to be done with more thought - we need to be aware of how much runoff is going into the sea following rainfall, and down through the rivers. Large amounts of sediments make the water very turbid, which affects the amount of sunlight reaching the corals, and the amount of food a coral can find in the water. What we put into the rivers and the soils all ends up on the reefs - pesticides, herbicides, sewerage and other chemicals. Fishing, again necessary, can be managed sustainably. Coral reef fishes play important roles in helping a reef to recover - herbivores such as rabbitfish ensure that large leathery algae don't take over the space that is usually occupied by corals. Any management restrictions put into place by Seychelles Fishing Authority need to be respected.

SNA: Any special ongoing projects to further develop your career?

KC:I look forward to more opportunities researching Seychelles’ marine environments. Besides bleaching, there are interesting comparisons to be made with other coral ecosystems. For example, Aldabra Atoll is an exceptional site because it is very isolated and has been protected for 40 years. Studying Aldabra’s coral reefs can help us to understand which changes are happening on reefs as a result of natural processes or as a direct impact of humans.

SNA: Where did the interest to become a marine biologist come from? Was that always your first career choice?

KC:I became interested in the sea when I was 17 and I won an open water diving course with Big Blue Divers after participating in the SUBIOS [Seychelles underwater festival] art competition. I was fortunate to be sent to James Cook University in Townsville, Australia with a scholarship from the Government of Seychelles for my undergraduate degree, and then some scholarships from the Australian Government and the university enabled me to undertake my PhD. My PhD research investigated ecological resilience of coral reefs, focussing on coral reefs around the Seychelles Inner Granitic islands. I worked in collaboration with the Seychelles Fishing Authority (SFA) and received help from the Seychelles National Parks Authority.

SNA: Why did you want to further your studies up to that level?

KC:James Cook University has a strong reputation for marine science and I was fortunate to study with scientists who are leaders in their fields. A PhD requires hard work and dedication, however, focusing on a topic that had value to my country, gave me personal motivation. My PhD strengthened our understanding of Seychelles coral reefs – the different characteristics and processes that are operating on our reefs. Reefs play an important role in Seychelles - part of the essence of our culture and also in supporting a valuable artisanal fishery and dive tourism industry. Finding the right balance between resource use and preservation is important to me.

SNA: How did it come about that you are now working in Australia?

KC:I made many professional connections while in Australia, which I hope will help me find more opportunities to promote Seychelles as a valuable field research site. Bleaching research in the Seychelles can benefit from international collaboration. It is my sincere hope that with a combined dataset, we will be able to compare with researchers studying the most recent bleaching events in Australia, Southeast Asia, and elsewhere in the Indian Ocean.

SNA: Have you had the chance to do any research on the Great Barrier Reef? Is it being affected in the same way as our local reefs?

KC:While I have been involved in research on the Great Barrier Reef during my time at James Cook University, I have not personally been involved in the recent surveys undertaken to monitor the current coral bleaching event. My colleagues have, however, and reports of the bleaching show that only 7% of the Great Barrier Reef has been free of the bleaching event. However, there are large differences in the areas that are and are not affected: the northern reaches of the extensive reef system have been most dramatically affected – 35% of corals surveyed in the northern and central sections of the Great Barrier Reef are dead or dying – whereas the southern section seems to have mostly escaped the damaging higher than average temperatures.

SNA: What can Seychelles learn from Australia in terms of managing its reefs and other marine resources?

KC:Australia was a fore-runner in terms of reef management, preserving and managing its marine resources and understanding that these resources would be finite if care wasn't taken. However, Seychelles is very different from Australia and much thought is required to understand the best methods and strategies to implement. The Seychelles coral reef system is different from Australia in scale – both of its major tropical reefs (Ningaloo and the Great Barrier Reef) are much larger than any in our little island nation – but also in its history, economies and culture. All these different aspects need to be considered and integrated by managers in the field and their advisors.