“Marshall Shaposhnikov” returns to Seychelles, leading a group of Russian naval ships to the islands 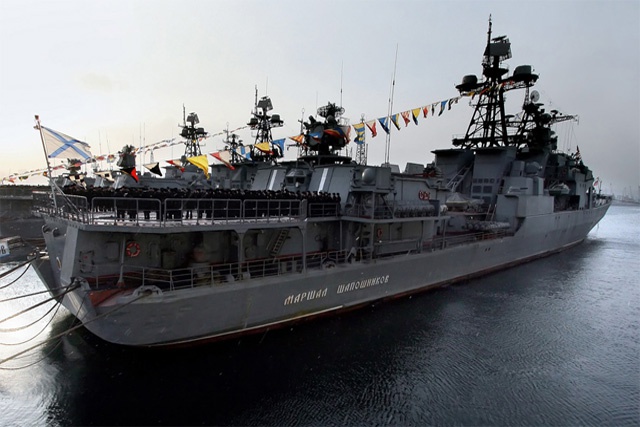 (Seychelles News Agency) - One year after it called to the Port of Victoria, Russian navy destroyer “Marshal Shaposhnikov” has returned to the Seychelles islands leading a group of Russian naval ships from the Pacific Fleet to the archipelago.

An official of the Russian Embassy in Seychelles told SNA that “Marshal Shaposhnikov” arrived in the Port Victoria late yesterday while another two Russian naval ships are expected to arrive later.

“Marshal Shaposhnikov is on her regular patrol missions at different points in the Indian Ocean to combat piracy and transnational organized crime in interaction with the headquarters of the European Union operation "Atalanta", NATO operation "Ocean Shield", Multinational Maritime Forces and Combine Task Force - 150 in Gulf of Aden. Together with our counterparts from China and India we enhance the capacity of anti-piracy missions and help to speedy eradication of the scourge of piracy. Great contribution to this fight is rendered by the Government and people of Seychelles,” reads an e-mail sent to SNA from the Russian Embassy in Seychelles.

The naval ships are expected to stay in port Victoria for four days whereby “Marshal Shaposhnikov” will be open for visiting by the general public on the morning of Saturday May 24.

The port call is also an opportunity for the Russian seamen to rest as well as to participate in siteseeing tours.

The embassy said this is the fourth port call to the Seychelles for the seamen from the Russian pacific fleet, having previously visited the island nation in 2009, 2011 and 2013. Their visit in 2013 which saw their participation in the Carnaval international de Victoria was reported by Russian news agency ITAR-TASS.

The Russian Embassy in Seychelles says that “This visit is just another manifestation of strong and friendly bilateral relations existing between our countries.”

In April this year Russian Foreign Minister Sergey Lavrov told the Russian media that his country has agreements with certain countries to accommodate Russian ships for maintenance as well as for the crew to rest while dismissing reports that Russia plans to create military bases abroad.

“Our fleet makes long-distance voyages. We agree with some countries that our ships and ships of our Navy use the existing infrastructure for calling into port, maintenance, small repairs, supplementing food and water reserves, recreation of crews,” Lavrov said in an interview Saturday March 29, on Russian TV "News on Saturday with Sergey Brilyom.”

Lavrov denied the Russia had plans to set up a military base in Seychelles, which had been reported in the Russian media earlier this year.

Port Victoria, the port of the capital of the Seychelles archipelago, is a popular port of call for rest and recreation for many military vessels based in the Gulf of Aden and Horn of Africa involved in different international anti-piracy missions in the region, including Operation Atalanta, the European Union’s counter-piracy operation off the coast of Somalia, as well as NATO and Combined Maritime Forces operations.