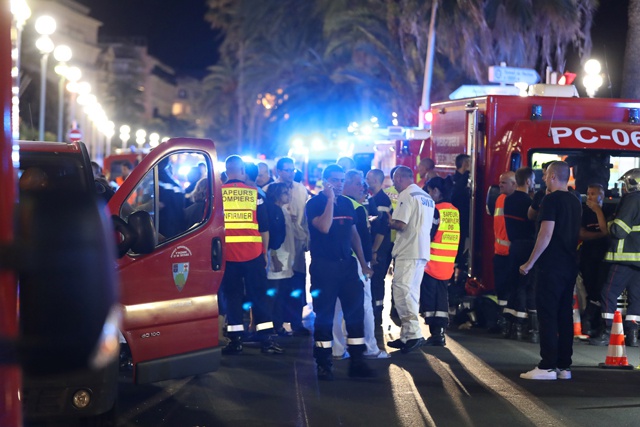 Police officers, firefighters and rescue workers are seen at the site of an attack on the Promenade des Anglais on July 15, 2016, after a truck drove into a crowd watching a fireworks display in the French Riviera town of Nice. (Valery HACHE / AFP)

(AFP) - A truck smashed into a crowd in the French resort of Nice, killing at least 80 people in what President Francois Hollande on Friday called a "terrorist" attack on revellers enjoying a Bastille Day fireworks display.

The driver was shot dead after barrelling the truck two kilometres (1.3 miles) through the festive crowd on the palm-lined Promenade des Anglais, sending hundreds fleeing in terror and leaving the area strewn with bodies.

Authorities said they found identity papers belonging to a 31-year-old French-Tunisian citizen in the truck, as well as "guns" and "larger weapons".

The attack was of an "undeniable terrorist nature," a sombre Hollande said in a televised national address, confirming that several children were among the dead as families came together to celebrate France's national day.

The bloodshed came on Bastille Day, a celebration of everything France holds dear, its secular republic and the values of "Liberte, Egalite, Fraternite" (Freedom, Equality, Fraternity).

The attacker struck after a day of military pomp and ceremony in Paris -- where armed forces, tanks and fighter jets swooped down the Champs Elysees avenue -- and spectacular firework displays.

"France was struck on its national day ... the symbol of freedom," said Hollande.

A photograph showed the front of the truck riddled with bullet holes and badly damaged, with burst tyres.

A lone doll lay abandoned on the promenade where families celebrated the holiday just hours earlier.

Robert Holloway, an AFP reporter who witnessed the white truck driving at speed into the crowd, described scenes of "absolute chaos".

"We saw people hit and bits of debris flying around. I had to protect my face from flying debris," he said.

Interior Minister Bernard Cazeneuve told reporters on the scene that the death toll stood at 80, with scores injured including 18 in "critical condition".

An account called SOS Nice was set up where desperate pleas for news of missing loved ones went out with pictures of a young girl with braces or a teenager pulling a funny face among those posted.

Some were quickly tracked down, according to relieved tweets.

The attack is the third major strike against France in less than 18 months and prosecutors said anti-terrorist investigators would handle the probe.

It comes eight months after Islamic State attacks on Paris nightspots left 130 people dead, dealing a hard blow to tourism in one of the world's top destinations.

US President Barack Obama condemned "what appears to be a horrific terrorist attack", although no group had yet claimed responsibility.

Hollande announced he would extend France's state of emergency for three months in the wake of this latest attack and "step up" the government's action against jihadists in Syria and Iraq.

"We will continue striking those who attack us on our own soil," he said, in reference to the Islamic State group.

He also called up army reservists to bolster the country's security services that are stretched to the limit.

France has been under a state of emergency ever since the November 13 Paris carnage, which came after 17 were killed in another attack in January at various sites including the offices of the Charlie Hebdo magazine and a Jewish supermarket.

The Islamic State group has repeatedly singled out France as a prime target for its military actions against the group in Iraq and Syria, and hundreds of jihadists have left France to go and fight in its ranks.

The Mediterranean city of Nice, with its pebble beaches and clear blue water, has been a magnet for sun-seekers and the jet-set since the 19th century.

A witness named Nader told BFM television he had seen the whole attack from start to finish, and had initially thought the driver had "lost control".

"I was in the street. He stopped just in front of me after he (crushed) a lot of people. I saw a guy in the street, we were trying to speak to the driver to get him to stop.

"He looked nervous. There was a girl under the car, he smashed her. The guy next to me pulled her out," he said in broken English.

Nadr said he saw the driver pull out a gun and start shooting at police.

"They killed him and his head was out the window."

The Promenade des Anglais was sealed off, crawling with police and ambulances as authorities from the local Alpes-Maritimes prefecture urged residents to stay indoors.

Over the past week, France had been breathing a sigh of relief after successfully hosting the month-long Euro 2016 football championship, which passed off without incident despite fears of attacks.

The tournament brought an all-too-brief burst of joy to a gloomy France, bogged down after the two attacks in 2015, violent anti-government protests, strikes and floods.

European Council President Donald Tusk said: "It's a sad day for France, for Europe, for all of us."

"The subjects of the attack were people celebrating liberty, equality and fraternity."

France truck attack was planned for months, with accomplices