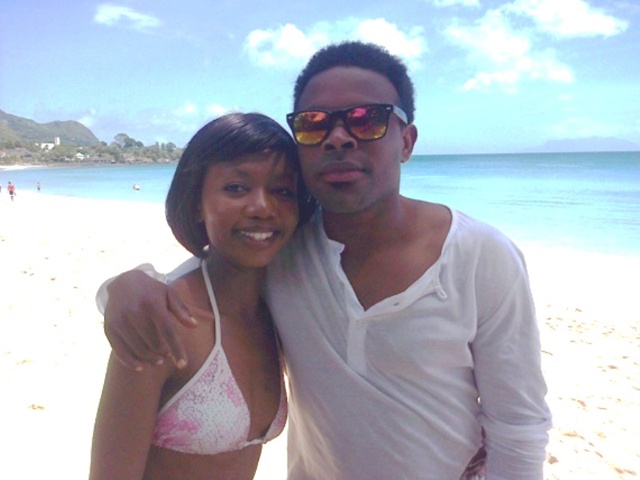 Photo of one of the scenes of the movie shot in Seychelles showing. In the lead roles are Nigeria’s ‘Most Promising Actor’ in 2013, Gabriel Afolayan, who plays the aviator and South African actress Shoki Mokgapa is the engineer. (Seychelles Nation)

(Seychelles News Agency) - Seychelles has premiered ‘A Love Like This’ – a movie shot in the island nation and Sri Lanka.

The two-hour movie, initiated by the Southern African Broadcasting Association (SABA), had the collaboration of the Seychelles Broadcasting Corporation (SBC), the Africa Film Factory and the Highstreet Riviera.

Directed by Sri Lankan filmmaker Chandran Rutnam, ‘A Love Like This’ was released at Deepam Cinema in the Seychelles’ capital Victoria, on Wednesday.

SBC’s chief executive, Antoine Onezime, said SABA wanted to produce a film that would portray Africa in a good light instead of the usual negative portrait of the continent showing famine and drought.

Rutnam says, “It is not the subject of the film that is most important. It is what we did with the film, the concept that the producers came up with.

He adds that “We should record this concept of making a movie like this one because I don’t think anybody, from this part of the world, has ever done it like this before.”

The movie tells the love story of an aviator, who is a minister’s son, and a young budding engineer from a less influential background, who succumbs to cancer.

Nigeria’s ‘Most Promising Actor’ in 2013, Gabriel Afolayan, plays the aviator and South African actress Shoki Mokgapa is the engineer.

A cast of actors from Seychelles, an archipelago in the western Indian Ocean, are also starring, and includes Miss Seychelles 2014, Camilla Estico, singer Aaron Jean and Robert Bresson, as the girl’s father.

SBC was the first to volunteer for the project which Onezime says is part of their ambition to bring locally-produced films to Seychelles’ audiences.

Employees from the local television corporation were also able to receive first-hand training locally and internationally on all aspects of film production.

Onezime says this will be very useful when the company goes into film production.

“The dice has been rolled, and we are investing in people and technology to start producing our own movies.”

SNA spoke to SBC’s Allen Boniface and Julius Payet, sound technician and cameraman who were involved with the production and travelled to Sri Lanka to observe filming.

“It was good to have that kind of exposure, to see how important my role as a sound technician is in a film production. It was a first experience, and I am quite impressed with the outcome,” said Boniface.

Payet, who does news and short production at SBC, said it was interesting to learn how to work with longer production and he has gained enough experience to start filming for movies.

“I learned that every single detail in film production is important, and you have to be very patient. Once we were filming a part of the movie and it became cloudy. We had to put everything on hold until the weather improved,” said Payet.

A guest at the movie premiere, Miera Savy, said it was an enjoyable movie that shows everyday life.

“The fact that it was shot mostly in Seychelles gives it an extra plus since the beautiful environment is strongly showcased in the film,” said Savy.

‘A Love Like This’ will go to theatres in South Africa, Nigeria, Tanzania and Kenya in October, and in North America and Europe in November.

Co-founder of the Africa Film Factory, Rahul Nehra, said a second film will be released in December and a third one in March next year.