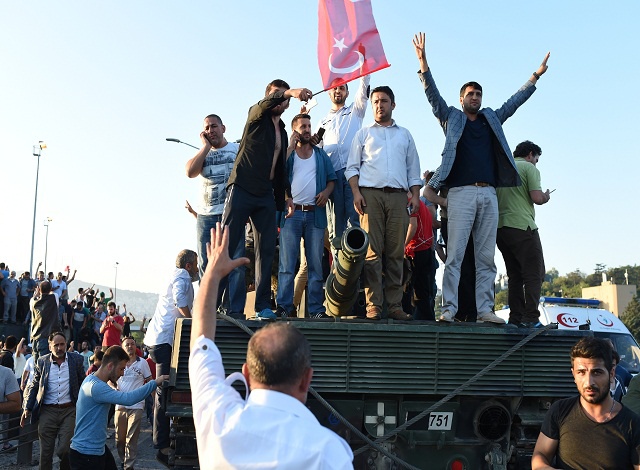 People react after they take over military position on the Bosphorus bridge in Istanbul on July 16, 2016. At least 60 people have been killed and 336 detained in a night of violence across Turkey sparked when elements in the military staged an attempted coup, a senior Turkish official said. The majority of those killed were civilians and most of those detained are soldiers, said the official, without giving further details. (Bulent KILIC / AFP)

(AFP) - Troops filed into Taksim Square uncertain of how they would be received. Before long, angry crowds had gathered to denounce them.

In the famous square where anti-government protests took hold in 2013, a huge crowd chanted against the putsch, draped with Turkish flags across their shoulders.

The scenes were reminiscent of the mass demonstrations three years ago against President Recep Tayyip Erdogan, who was then prime minister.

But this time, the crowds were on his side -- and it was the military, badly outnumbered at a hundred against a thousand, who were the target of their ire.

"Military get out," they chanted, crowding around a monument that marks the birth of the Turkish republic almost a century ago.

As a helicopter flew overhead the crowd began to boo, shaking their fists at the night sky.

Then there was horror as the soldiers opened fire.

At least three people were hit. One man lay bloodied on the ground. Ambulances arrived, their blue lights illuminating the angry faces of the crowd.

"The military, they did this! Murderers!" screamed one man above the shouts of the crowd.

Minutes later riot police poured out of trucks, brandishing their shields and clearing the space. Crowds gathered on the sidestreets straining for a glimpse as an eerie quiet descended.

Smatterings of gunfire echoed across the almost empty square. The occasional ambulance streaked across the space, as white police vans stood guard.

Soldiers also opened fire at thousands of civilians trying to cross the Fatih Sultan Mehmet Bridge across the Bosphorus by foot, an AFP photographer witnessed, leaving tens of people injured.

One man stood stunned in the street nearby, a bloodied Turkish flag stuck to his chest. Crowds gathered around an elderly man receiving CPR.

- 'Brothers should not spill blood' -

Shops had closed hurriedly as news of the coup attempt broke.

Dozens queued at ATMs to get money, worried about what the next days might bring.

In the bustling streets of Istanbul's Sisli neighbourhood, people panic-bought water before disappearing into their homes, from where the loud sounds of live news broadcasts rang out.

Parts of Istanbul were left looking like a ghost town, and it was not until hours later that the crowds took to the streets, possibly heeding a call by Erdogan for the public to come out and resist the coup.

The two bridges that connect the European and Asian sides of the Bosphorus -- usually packed with cars at all hours -- were devoid of traffic.

But at one bar at least, a group of young men stayed defiantly in their seats, saying they would not leave their tables or their drinks.

No military coup would stop them enjoying a Friday night in Besiktas, a hip neighbourhood on Istanbul's European side.

As helicopters flew above and eyes darted nervously upwards, proud Besiktas resident Ali said he did not want his country to suffer the latest in a string of coups since 1960.

"This country has seen so many coups, I am against them. It will not work," he said as he showed off his Ataturk tattoo, expressing his love for the founder of modern Turkey.

"Look, everyone is going home because of the coup. How many people can you see here? This place should be filled with thousands of people.

"This coup is not good, it will set us back 20 years. Brothers should not spill blood."

His friend Basak agreed. "This country has seen many coups and we are not ready for another."

Then the pub owner ran out shouting that state television "has declared it's a coup -- there's martial law!"

Within seconds, chairs were folded up and the drinkers had scattered.