AIDS summit in S.Africa to warn of lagging effort 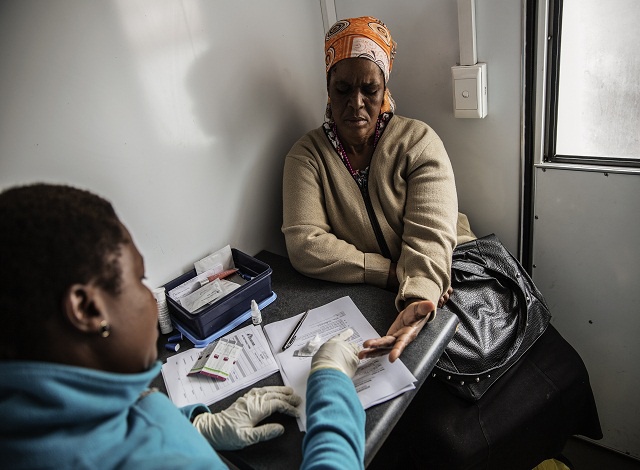 This file photo taken on November 06, 2014 shows A South African woman gets tested for HIV by an health worker working with Doctors withour borders (MSF) at a mobile clinic in Eshowe. Sixteen years after Nelson Mandela galvanised the world to take up the fight against AIDS, experts and activists return to the South African city of Durban on July 18, 2016 seeking to revitalise the fight against the disease. (GIANLUIGI GUERCIA / AFP)

(AFP) - Sixteen years after Nelson Mandela galvanised the world to take up the fight against AIDS, experts and activists return to the South African city of Durban on Monday, seeking to revitalise the fight against the disease.

Some 18,000 scientists, campaigners, funders and lawmakers are descending on the port city for the five-day 21st International AIDS Conference -- a council of war on a pandemic that has claimed more than 30 million lives in 35 years.

Singer Elton John and Britain's Prince Harry will host a session at the conference discussing the HIV epidemic among young people.

"The message from Durban to the world is going to be that it's too soon to declare victory. We have a long way to go," International AIDS Society president Chris Beyrer told AFP.

Until 2000, only wealthier countries had hosted the biennial AIDS meeting.

That all changed when South Africa became the first developing country -- and the first with an unbridled epidemic of HIV in its population -- to take the helm.

The conference was a highly-charged affair, but its emotional zap transformed the AIDS campaign.

And South African activists angrily levelled accusations of AIDS-denialism at then-president Thabo Mbeki, who insisted the disease was caused by poverty, not by the human immunodeficiency virus (HIV).

The star-studded cast in Durban was headed by Mbeki's predecessor Mandela, who described the epidemic as "one of the greatest threats humankind has faced."

The surge of energy from Durban helped launch a string of programmes to provide life-saving drugs for the Third World and dynamise research into new frontiers.

But 16 years after Durban, there are fears that HIV, by becoming a chronic but manageable disease, has become like wallpaper.

With no cure for the virus in sight, patients face lifelong reliance on expensive antiretroviral drugs which cause side effects.

This time around, delegates will pore over the latest scientific research, amid frustration that there is still no vaccine for the stealthy, shape-changing virus.

- An AIDS-free generation? -
The United Nations has set a target of ending the AIDS pandemic by 2030, but warned that efforts are lagging.

Infection rates are rising in many regions of the world, the UNAIDS agency said, with Russia especially hard hit.

There are some 36.7 million people worldwide living with HIV/AIDS, mainly in sub-Saharan Africa.

Of these, only 17 million are receiving treatment.

"We have to reach the other 20 million people living with HIV, and that's going to take resources," said Beyrer.

Nobel Medicine laureate Francoise Barre-Sinoussi, the French virologist who co-discovered the AIDS virus in 1983, stressed the need for more funding.

"We need to renew investment and make all the changes needed to move towards an AIDS-free generation," she told AFP.

Delegates expect a different focus and tone compared with the Durban of 16 years ago.

At the time, hundreds of delegates walked out when Mbeki, who relied on advice from discredited scientists, told the conference opening: "It seemed to me that we could not blame everything on a single virus."

"It was a very painful moment in the world," Beyrer recalled of the 2000 event.

"The world no longer looks at us as a pariah," South African Health Minister Aaron Motsoaledi told AFP.

In the rest of the world, progress has also been uneven.

New infections globally fell six percent since 2010 -- from 2.2 million to 2.1 million, and AIDS-related deaths have almost halved from their peak, at two million, in 2005.

Infections are soaring in north Africa and the Middle East, which now has the fastest-growing epidemic.

In Russia, where reported HIV infections topped one million last year, government resistance to supporting programmes for gay men and drug users is exacerbating the crisis.

"We really hope people will come away from Durban with commitment to fix the laws, policies and practices in their countries that continue to block access to these people who need it most," said Beyrer.