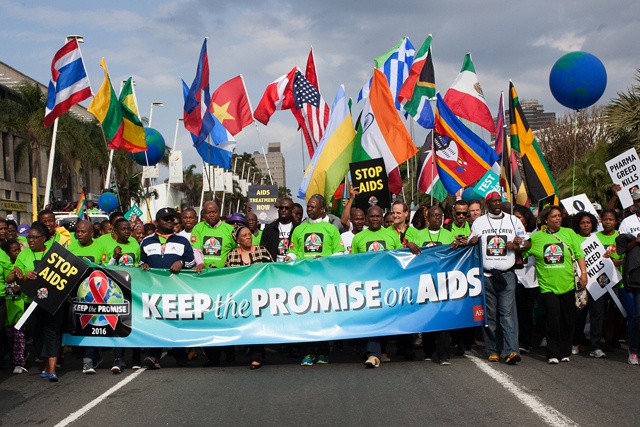 AIDS activists hold banners and wave flags as they attend a march called "Keep The Promise 2016" through the streets of Durban on July 16, 2016. In a statement released on the first day of a major international conference on the virus, UNICEF said HIV/AIDS remains the leading cause of death among Africans aged between 10 and 19. (Mathew Kay / AFP)

(AFP) - HIV/AIDS remains the leading cause of death among Africans aged between 10 and 19, UNICEF chief Anthony Lake said Monday at the start of a major international conference on the virus.

"Despite remarkable global progress in tackling the HIV/AIDS pandemic, much work remains to be done to protect children and adolescents from infection, sickness and death," Lake said in a statement released on the first day of AIDS 2016, held in the South African city of Durban.

"AIDS is still the number two cause of death for those aged 10-19 globally -- and number one in Africa," added the head of the UN children's agency.

According to UNICEF, AIDS-related deaths among people aged between 15 and 19 have more than doubled since 2000, with 29 new infections within this age group taking place across the world every hour.

"Girls are particularly vulnerable, making up about 65 per cent of new adolescent infections worldwide," said the statement.

"In sub-Saharan Africa, which accounts for about 70 per cent of people in the world living with HIV, three out of every four adolescents newly infected by HIV in 2015 were girls."

Some 68 per cent of 52,000 young people surveyed in 16 countries said they did not want to be tested, both because they were afraid of an HIV-positive result, and because they were worried about social stigma.

Meanwhile, new mother-to-child infections taking place during childbirth or breastfeeding have dropped by 70 percent since 2000.

In 2015, just six countries -- all but one in Africa -- accounted for half of new infections among under-14s: India, Kenya, Mozambique, Nigeria, South Africa and Tanzania.

"The undeniable progress we have made in the last three decades does not mean that our struggle is over," said Lake.

"The battle against AIDS will not be over until we redouble prevention and treatment efforts; until we reach those young lives still being denied the progress that millions before them have enjoyed; and until we end the stigma and fear that prevent so many young people from getting tested."