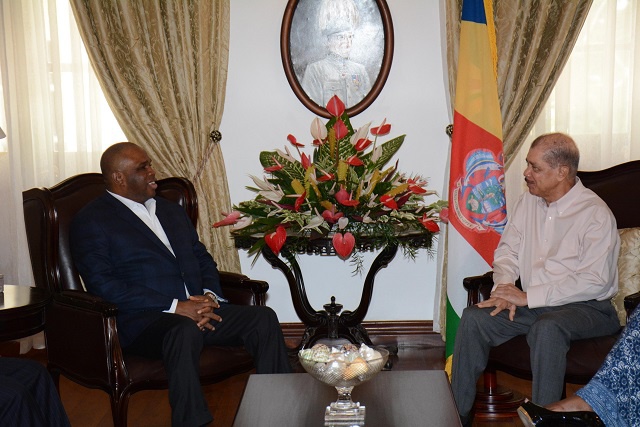 The President and Chairman of the Afreximbank’s board of directors Dr Okey Oramah during talks with President James Michel at State House. (Joena Bonnelame, Seychelles News Agency)

(Seychelles News Agency) - Prospects for economic development in Africa, the blue economy concept and intra-African trade are among the main topics of discussions as political and business leaders from the continent and international economic experts meet in Seychelles this week.

The African Export-Import Bank (Afreximbank) is holding its 23rd annual general meeting in the island nation since Monday.

The President and Chairman of the bank’s board of directors Dr Benedict Okey Oramah says issues being discussed include the financial performance of the bank and economic development in Africa.

Oramah adds that the AGM will also be exploring the prospects for more economic development as well as the types of intervention Afreximbank will be making to support member countries.

He spoke to journalists at State House on Tuesday after meeting the Seychelles President James Michel, during which the financing of past and future projects were highlighted.

“There are discussions to put in place today finances for SMEs and we are also putting in place programmes to support the blue economy agenda of the government of Seychelles,” says Oramah, referring to small to medium enterprises.

The blue economy concept is in fact one of two major issues which Afreximbank delegates will be tackling during a series of seminars organised on the sidelines of their annual general meeting in the 115-island archipelago in the western Indian Ocean.

“The blue economy and how it represents a new frontier for Africa and for economies such as Seychelles that have very good links with the sea. Also intra-African trade which we believe would be the main driver for industrializing Africa. These would be the two main things the seminars would be talking about.”

A half-day investment forum run in parallel to a three-day exhibition spearheaded by the Seychelles Investment Board starting on Thursday is also expected to see the participation of some 50 companies in Seychelles who will be showcasing their products and services to over 500 delegates coming from various countries.

The Afreximbank headquartered in Cairo, Egypt, to which Seychelles is a member, has been in operation since 1994. Its main focus is on financing and promoting intra- and extra-African trade.

Seychelles’ Finance, Trade and the Blue Economy Minister Jean Paul Adam will on Saturday take over as chairman of the annual general meeting of the bank’s shareholders for the next year.