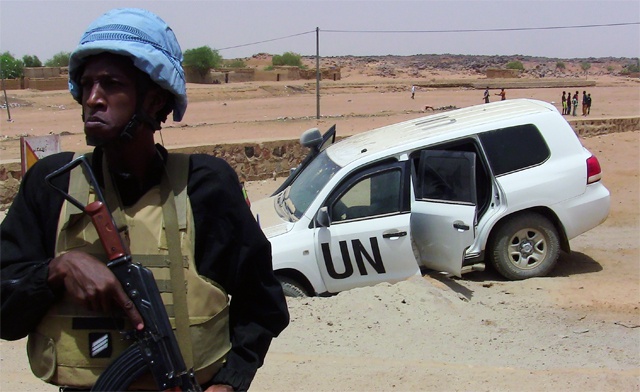 A picture taken on July 14, 2016 shows a soldier of the United Nations mission to Mali MINUSMA standing guard near a UN vehicle after it drove over an explosive device near Kidal, northern Mali. (SOULEYMANE AG ANARA / AFP)

(AFP) - The Malian government on Thursday declared a state of emergency, a day after an attack in the centre of the country left 17 soldiers dead and 35 wounded.

The government said the state of emergency would last "for a duration of 10 days" following the attack at at an army base in Nampala.

Its also said a period of national mourning would begin on Thursday "in homage to the victims of the terrorist attack".

In the hours after Tuesday's assaults two groups -- one jihadist, the other ethnic -- both claimed to have carried out the raid on the military camp.

Several security sources in the region told AFP they doubted the veracity of the claim of responsibility from the National Alliance for the Protection of Peul Identity and Restoration of Justice (ANSIPRJ).

The ethnic group was only founded last month following inter-communal clashes in the area and lacked the means to mount an attack.

The government that the military was in control in Nampala and that the attackers would be hunted down and punished.

The attack was the latest in a series of assaults on security forces in Mali, and was condemned by the United Nations and European Union.

A previous state of emergency in place since April had only been lifted the week before.

Northern Mali has seen repeated violence since it fell under the control of Tuareg-led rebels who allied with jihadist groups linked to Al-Qaeda in 2012.

But attacks are now becoming more frequent in the country's centre, close to its borders with Burkina Faso and Niger, both from criminal and jihadist elements.

Although Islamists were largely ousted by an ongoing French-led military operation launched in January 2013, sporadic attacks from desert hideouts are common.