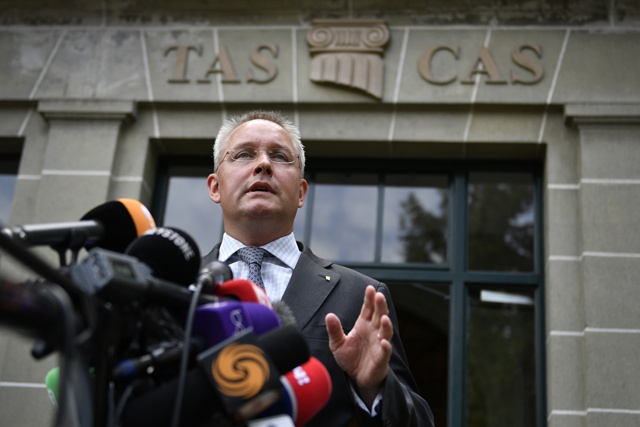 Secretary General of the Court of Arbitration for Sport (CAS) Matthieu Reeb delivers a statement on July 21, 2016 outside the CAS headquarters in Lausanne. (FABRICE COFFRINI / AFP)

(AFP) - The international sports tribunal on Thursday rejected an appeal by 67 Russian athletes seeking to overturn an IAAF doping ban on them competing at the Rio Olympics.

The ruling by the Court of Arbitration for Sport (CAS) is seen as a key indicator as the International Olympic Committee (IOC) debates whether to order a blanket ban on Russia over accusations of state-run doping.

CAS said it had "dismissed" an appeal by the Russian Olympic Committee and 67 athletes against a ban ordered by the International Association of Athletics Federations (IAAF).

The IAAF ban covers all international competition, including the Rio Games which start August 5, and follows an investigation last year which found widespread "state-sponsored" doping.

Originally, 68 Russians had appealed against the IAAF ban but the IAAF has cleared US-based long jumper Darya Klishina to compete in Rio as a neutral.

The IOC and the CAS decision said that Klishina could compete under the Russian flag.

An IOC ethics commission is to rule on the case of Yuliya Stepanova, an 800m runner who gave evidence about the doping.

"The CAS award upholds the rights of the IAAF to use its rules for the protection of the sport, to protect clean athletes and support the credibility and integrity of competition."

The Kremlin expressed "deep regret" over the CAS decision however. Russia has denied any state involvement in the doping crisis.

The CAS ruling has been the focus of Olympic attention, however, since an independent WADA report this week said Russia ran a "state-dictated failsafe system" of drug cheating.

IOC president Thomas Bach called Russia's actions a "shocking and unprecedented attack on the integrity of sport and on the Olympic Games."

According to the report by Canadian lawyer Richard McLaren, the doping including the switching of Russian samples by secret service operatives at the 2013 world championships in Moscow. It said the operation was directed by the sports ministry.

WADA, backed by the United States and other nations, has called for Russia to be completely banned from the Rio Games. The IOC has said it will study the CAS decision and other legal implications before making a decision next week.

Russian Olympic officials have said an IOC decision could be made as early as Sunday.

The IAAF suspended Russia in November because of an earlier doping investigation which also said there was "state-sponsored" action.

It refused to lift the suspension last month, meaning no Russian athletes could take part in Rio.

Russia was the second most successful athletics nation at the 2012 London Olympics, behind the United States, with seven gold medals, four silver and five bronze.

Originally, Russia had 17 medals. But several are already at risk because of doping failures.

Olympic 3,000 metre champion Yulia Zarapova has tested positive for anabolic steroids and will almost certainly be stripped of her gold medal.

Woman's discus thrower Darya Pishchalnikova, silver medalist in London, has been banned for 10 years because of drug failures.

The IOC has not yet reconfirmed the results of the London Olympics following the retesting of doping samples.

"While we are thankful that our rules and our power to uphold our rules and the anti-doping code have been supported, this is not a day for triumphant statements.

"I didn’t come into this sport to stop athletes from competing. It is our federation’s instinctive desire to include, not exclude."

He said that after the Rio Games an IAAF task force "will continue to work with Russia to establish a clean safe environment for its athletes so that its federation and team can return to international recognition and competition."