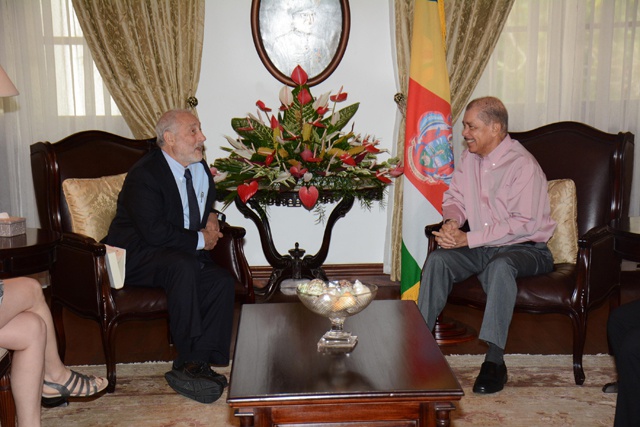 (Seychelles News Agency) - American economist Professor Joseph Stiglitz said Thursday that Africa is becoming more competitive and that the continent needs to determine what can be done to really take advantage of the economic transformation.

Stiglitz is among economic experts and business and political leaders addressing a series of seminars on the sidelines of the 23rd annual general meeting of the African Export-Import Bank (Afreximbank) taking place in Seychelles.

The conferences are being held under the theme: "Africa’s new economy: Intra- African Trade and the Blue Economy as catalyst for economic transformation."

“In one of the sessions tomorrow [Friday] I am talking about some of the challenges of African development and particularly the transformation of Africa’s economy,” Stiglitz told journalists. “Since this is a meeting of the Afreximbank, it’s particularly concerned about trade and finance for trade.”

Stiglitz said that he will also adding a bit of historical context to his presentations “going back in the 1980’s where IMF and the World Bank’s structural adjustment programmes actually hurt the industrialization of Africa.”

According to him, although Africa was set back by such programmes and the continent’s industrialization stands as a much lower level than 30 years ago, there exists today what he termed as ‘a real moment of opportunity for Africa.’

Stiglitz spoke to journalists at State House on Thursday after meeting with Seychelles President James Michel. The blue economy concept Seychelles is promoting and how this has been adopted as part of the United Nations sustainable development goals were some of the most interesting parts of his discussions with the Seychellois head of state.

A Nobel Prize winner in economics in 2001 and a former chief economist of the World Bank, Stiglitz has not missed the opportunity during discussions with Seychellois officials including the finance minister to talk about the country’s experience of an economic crisis and reform programme embarked on in 2008.

“Always when you make these decisions there’s a lot of nervousness there’s a lot of uncertainty can’t see the future and so we talked about how Seychelles managed its way through that very difficult period to the current one where it’s been an era of real economic stability,” he said.

The Afreximbank events is bringing together not only political and economic experts from Africa but also potential investors from the continent and beyond. Local businesses are also having the opportunity to market their products aiming to attract potential investors and possible funding.

A three-day exhibition spearheaded by the Seychelles Investment Board started on Thursday and is seeing the participation of some 50 companies in Seychelles who are showcasing their products and services to the over 500 delegates coming from various countries.