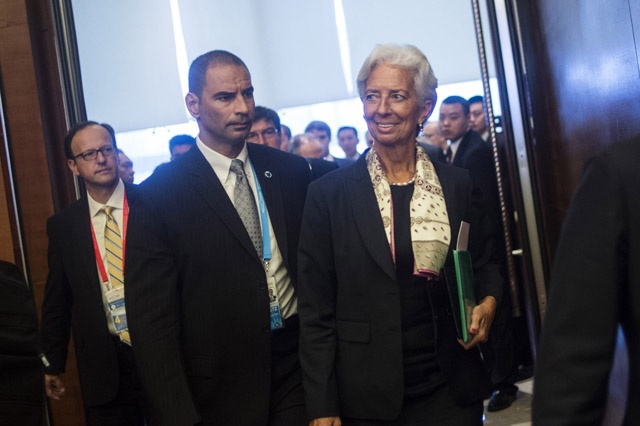 (AFP) - Bad timing: IMF chief Christine Lagarde was in China for a meeting of the powerful G20 countries when the news came Friday that she would be put on trial back home in France over a state payout to a businessman in 2008.

That underscored the challenge the case presents -- how Lagarde, just beginning her second term as International Monetary Fund managing director, will continue to address the urgent needs of the global economy while battling prosecution back home.

She is facing charges of negligence for not protecting state interests over her role in the French state's payout of 404 million euros ($445 million) to businessman Bernard Tapie to settle his long-running row with a state-owned bank, during her time as finance minister.

Lagarde maintained her innocence as the case moved slowly forward from 2011 while she was dousing huge economic fires, especially in Europe, through her first mandate at the IMF.

At each stage, the Fund's executive board voiced its confidence in her carrying out her duties with "the highest standards of ethical conduct," as her contract states it.

Again on Friday, after the trial was ordered, the board, representing the Fund's 189 members, reiterated its support.

"She's done a very good job over the last five years and the members of the Fund have decided that the risk was worth taking," Edwin Truman, a former US Treasury official and expert on the IMF, told AFP.

Lagarde restored the image of the IMF after it was sullied by her predecessor Dominique Strauss-Kahn, a fellow Frenchman forced to resign in a lurid sex scandal.

She took the fund through huge, complex bailouts of European economies, and strengthened the IMF by raising the role of emerging economic powers like China in its activities.

But now, her legal situation could weaken her position and again mar the image of the Fund, which is often accused of forcing punishing austerity on countries it is rescuing.

She would be the third managing director in a row to be dragged into court. Strauss-Kahn's predecessor, Rodrigo Rato, IMF managing director from 2004 to 2007, is facing trial in Spain over alleged misuse of funds as head of Bankia.

Truman though said that all should not reflect on the IMF. "Critics of the Fund will use anything they can get," he noted.

But the images of another IMF chief executive being paraded before a court are not likely to be harmless.

"The world is at a very uncertain stage and we need the IMF to be in the position to lead," said Andrea Montanino, who has worked with Lagarde as Italy's representative on the IMF executive board.

Montanino agrees that Lagarde has a good record. But a lengthy trial that interferes with her ability to oversee crucial IMF operations in multiple countries around the world could be damaging.

"The only doubt I have is whether the trial will imply that she has to spend much of her time in Paris. Because that would be detrimental for her job at the IMF," Montanino said.

In an interview with AFP at the beginning of July, Lagarde insisted she acted in "good faith" and said she is "focused entirely" on her mission at the IMF.

If the trial, which could open before the end of this year, ends with Lagarde found guilty, it could pose a problem. Punishment could include up to one year in prison and a 15,000-euro fine.

Such a scenario is not envisaged in her contract with the IMF, but it could weaken her leadership.

"If she's convicted, she will have to step down," said Montanino.