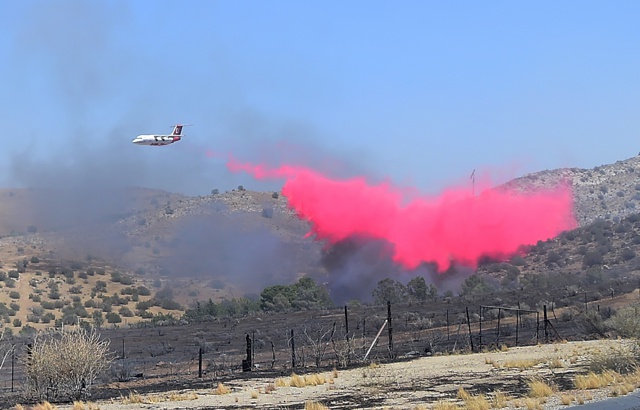 A helicopter drops retardant over a fire in the mountains around Lake Isabella, California on June 24, 2016. (FREDERIC J. BROWN / AFP)

(AFP) - A fire burning out of control in Southern California has grown to a massive 20,000 acres, officials said Sunday, as residents in an area north of Los Angeles were forced to evacuate.

The blaze, which has been dubbed the "Sand Fire" after a nearby neighborhood, is only 10 percent contained, according to the National Wildfire Coordinating Group (NWCG).

Local media reported that a burned body had been recovered in the city of Santa Clarita, located some 35 miles (55 kilometers) from downtown Los Angeles, although it was unclear if the individual had died in the blaze.

The fire has been burning in California's Santa Clarita Valley since Friday, but has now shifted to threaten more populated areas such as the Sand Canyon neighborhood of Santa Clarita, county fire officials said, according to the Los Angeles Times.

At least 1,500 homes are threatened, the Times reported.

Orange flames could be seen lapping at the night sky early Sunday, as a number of roads remained closed and health officials warned of poor air quality and hazardous smoke.

More than 900 firefighters are battling the blaze and residents have been evacuated, NWCG reported.

It added that structures had been destroyed or damaged although it was unable to confirm specific properties.

Local media reported that ash and smoke could be seen as far away as Pasadena and Malibu.

California is experiencing a record five-year drought and trees and brush are at risk of igniting from the smallest spark.

General » Be a reporter: Write and send your article » Subscribe for news alert
Tags: fire, california