From Seychelles to the British Army to the Bank of England: Interview with security expert Ron Bonnelame 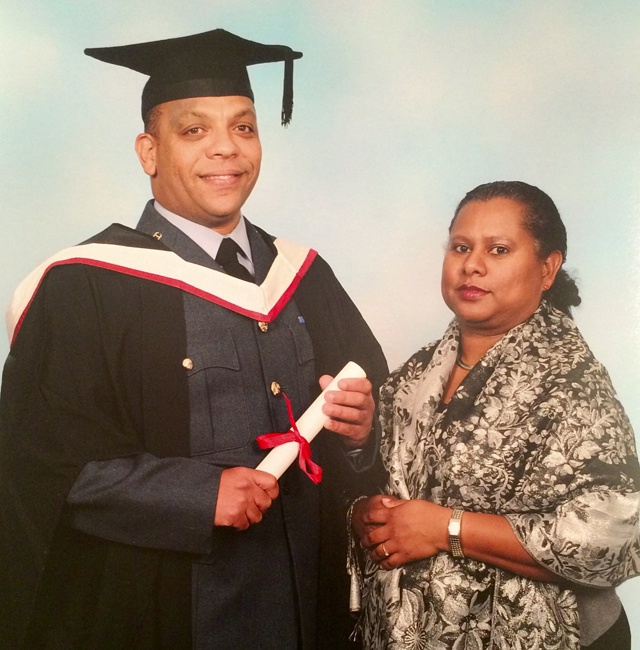 Having spent many years in the Royal Military Police, Bonnelame is a qualified instructor in several different disciplines, including weapons handling. (Ron Bonnelame)

(Seychelles News Agency) - Many people grow up with a career very different to the ones they dreamed of when they were younger. Would-be fighter pilots, doctors and astronauts often grow up to hold down very ordinary office jobs. But for Ron Bonnelame, being born in the United Kingdom was a happy coincidence that he used to fulfill his boyhood dream of becoming a soldier.

Now a seasoned military police instructor and security operative, Bonnelame is a typical example of the many Seychellois who leave the comfort of their tiny island home in the western Indian Ocean - with its population just under 100,000 people - to venture out into the rest of the world and make notable impacts and contributions.

SNA caught up with Bonnelame and found out more about his life, career and future goals.

SNA: First, let’s start off with a bit of family background. Where did you grow up and go to school?

RB: I was born in 1973 in London while my parents were in the UK. We moved back to Seychelles when I was old enough to fly and my brother and two sisters were born in Seychelles. Due to my parent’s careers, I attended a number of schools, including La Rosiere Primary, Port Glaud, Belonie and Grand Anse Mahe. Then I did two years at the NYS [National Youth Service] and two years at the Seychelles Polytechnic’s Tourism School.

SNA: You started off working for Air Seychelles. What interested you in pursuing a career in security/defense?

RB: My dream was always to work in the military, police or security.  But I wanted to make that move when the time was right for me. I went through tourism school after NYS and I already had three relatives working for Air Seychelles, so I felt it would be a natural move to work next to my aunts, carry on with the airline training I had at Polytechnic, plus learn and improve my English and French for when I went to the UK in search of my dream career.

SNA: Did you do any training in this field before you went to join the British Army?

RB: A year before I left Seychelles, in 1995, I saw an advert in a magazine that my cousins from Canada sent me. It was a Security Diploma correspondence course. I enrolled and passed it with distinction, and that was a confidence boost for me. Then I was part of the Youth League, which was a youth military branch for the Seychelles People’s Progressive Front Party (SPPF). At the time the country was a one party state and many youngsters joined this group, where I benefitted from an initial insight of basic military training, discipline and community services.

SNA: How long have you been living overseas? How did you end up as a military and police instructor?

RB: I left Seychelles in August 1996. Three days after I arrived in the UK I went straight to the army careers office and signed up as a British citizen, since I was born there. Many Seychellois later joined under the Commonwealth Soldier scheme which was a programme to boost the number of soldiers with an ethnic background within the military. I wanted to join the Royal Military Police unit, but because I did not have a checkable background prior to joining I was not allowed. So I joined the Royal Logistics Corps for two years instead.

After this, I then qualified to join the Royal Military Police (RMP). With the RMP I completed many courses, including defense driving instructor, use of force instructor and special investigations. So I guess that’s where I started off as an instructor. Plus, as the corporal of my section I trained about 1,500 new RMP soldiers and officers in police duties, police driving, use of their weapons etc.

SNA: What is your current role at the Bank of England and what is it like working for such a prestigious organisation?

RB: Working for the Bank of England is a prestigious place to work for any British person, let alone a Seychellois. I work in operations which covers a vast variety of tasks. With the Bank now celebrating its 300th year in existence, I could not feel more proud to be part of this organisation.

SNA: What can you define as your proudest moment or the highlight thus far in your career?

RB: In the British army my proudest moment was in 2005 when I was selected from among 2500 Royal Military Police soldiers to go to France for 10 days to represent the whole of the British military and UK security services. I was promoted to sergeant for this task. It was the 60th Anniversary of D-Day in Caen, France and my role was to sit in the security control room and communicate with the British military on the ground.

When 12 buses full of British War Veterans got lost from the ferry port at Calais, I had to negotiate with the French police to send 22 of their 45 police bikes to search, locate and escort the convoy back on track and in time for the opening ceremony. Another instance was when the US President’s convoy was heading towards road traffic, which was unpredicted. The US security asked the French Police for clearance but they did not have the manpower in that area so the French rep reached over my desk and asked for the British Army to help and I quickly deployed two dozen of my guys and cleared the traffic 20 minutes before they got there.

SNA: What has all your military and police training taught you and how has it changed your life?

RB: The training, work and life style being in that line of work has been very beneficial. It has made me appreciate life more and understand people better. The British Army and Police have very high standards and having spent all these years within these establishments, going up the ranks and gaining new responsibilities has taught me new people skills, ways to help others more effectively, and how much small gestures build up into strong and reliable bigger pictures. I have more confidence and self-esteem through all the experiences I have been through. I have also travelled to 15 countries for work and I have learnt more about different cultures and languages.

SNA: Military stuff aside - what’s your personal reaction to the UK’s decision to leave the European Union? What do you think the future holds?

RB: Only 18 percent of British businesses trade within the EU, so I don’t think leaving the EU will affect us that much, plus it will enable us to trade with countries outside the EU as currently it is the EU that slows down or stops them trading with us. Of course, any change is hard to swallow in the short term. So I think many EU countries might punish us to start with by slowing down their trading but they will quickly realize that they are shooting themselves in the foot and trades will flourish again. When we start trading with the rest of the world... I personally think that Britain will do well.

SNA: What about the future - where do you see yourself in the long run? Do you think you might go back to Seychelles?

RB: My future is a split affair. On one hand I have my family to look after. My two boys [now 6 and 8] are depending on me and their mother to show them a good entrance to life. On the other hand I have my career. I would love to move back to the Seychelles and contribute my five cents towards the betterment of the country.

SNA: When you're not working, what is your favourite pastime?

RB: I have very friendly and caring in-laws and we are close and spend most of our time together. I also play part time in a band as a drummer as well as music production. I released an album in August 2015 entitled ‘5th Dream’, which was released in Seychelles but I have also sold it to Seychellois living in different countries. I also love driving - I’m currently doing my advanced driving course on Sundays and hope to graduate in the autumn.

SNA: Do you miss home or are you more used to being here in the UK? How often do you go back?

RB: If I said I don’t miss Seychelles I would not be telling the truth. I am so glad I grew up in Seychelles. The good education, discipline and life skills I learnt there I wouldn’t have benefitted from if I grew up in the UK. However, one has to also say that Seychelles is not like that anymore. For the past five years I have gone back every year, and I have also been asked to give a helping hand to different organizations of which I am able, qualified and experienced in.

RB: There are so many childhood memories from Seychelles. They are all based around everyone in the community being very close and helping each other. We would gather teams from lower Mont Buxton to compete with other teams from the same district in playing marble games, ‘toupi’, football, volleyball and many other recreational activities. We used to swim at the inter-island pier and walk home from school, making pit-stops at different families’ mango and guava trees. These are memories that I will never forget. My favourite Creole dish is plain rice topped with octopus curry, with green papaya chutney on the side and fried aubergine in flour batter - followed by the famous ‘Ladob’ dessert made from banana and cassava! Now I’m hungry…

Editors note: Story updated on Wednesday August 17 at 8.20am.

Some parts of the interview have been removed at the request of Ron Bonnelame who cited security reasons . SNA respects the sources’ need to protect certain aspects of his private life.”