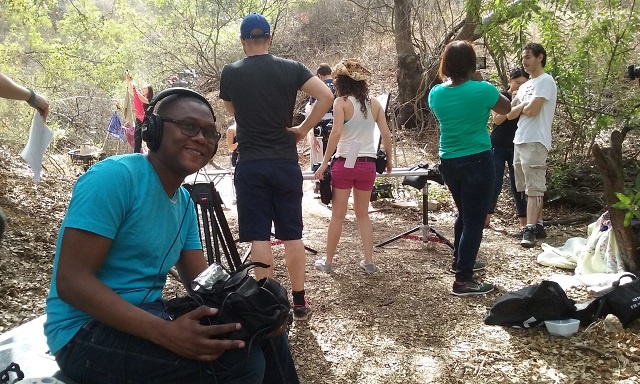 Raymond Clarisse spent a year in Los Angeles from January last year, studying an accelerated programme to achieve his dream of learning about film production.(Raymond Clarisse)

Raymond Clarisse recently became a rare islander to earn a Master of Arts in Film and Media production, graduating with honours from the New York Film Academy in Los Angeles.

“Film is all about story telling. I’ve told stories through plays, through musicals, through television and I’ve realized that films provide another kind of opportunity to tell stories that bring out a kind of emotion that can only be portrayed through the camera,” Clarisse said to SNA.

Clarisse, 35, got the okay from his employer -- the Seychelles Broadcasting Corporation, where he works as a Content Development Manager -- to spend a year in Los Angeles from January last year, studying an accelerated programme. He partly funded his own studies with the assistance of a government scholarship to achieve his dream of learning about film production.

He screened his final thesis film last week for friends, families, colleagues and organisations that supported his studies and film project.

The 16-minute movie titled ‘Mon Retour’ [My Return] tells the story of a mum who returns home for her daughter’s wedding after 20 years being away, facing her child’s resentment at the same time feeling tormented by a secret – that her daughter was the product of a rape.

Through the screening Clarisse wanted to showcase his conviction that Seychelles can raise up actors, cameraman, producers and other talents as he had chosen to shoot the film in the island nation while his university colleagues made use of all the resources available at the New York Film Academy.

“I did it for artistic reasons, as I was able to bring another kind of picture, an exotic quality that they would not be able to bring out, as everyone was filming in Los Angeles,” he said to SNA.

“At the same time I felt more comfortable in my own playground. I was away for nine months so I was ready to come back and see how I can work with my own people.”

“You will doubt yourself a lot because the movie world is a place where one has to face a lot of criticism and you have to defend every movement, every word, every dialogue because you need to make it believable.”

Clarisse should be able to put his knowledge to good use now that the national television where he has worked for years as a producer is aiming to bring locally produced films to Seychelles’ audience.

Other employees from the local television corporation recently received first-hand training locally and internationally on all aspects of film production as part of a project SBC volunteered to join resulting in the production of a movie shot in Seychelles and Sri Lanka.

SBC’s chief executive Antoine Onezime describes the two developments as a path in the right direction to raise up talents that are needed for opportunities that will be available as the organization prepares to move to digital transmission in the near future.

Aside of eyeing the scope that filmmaking can bring for a tiny 115-island archipelago in the western Indian Ocean, Clarisse also dreams of seeing stories from Seychelles being told beyond the archipelago.

“Right now films coming out tell more or less the same stories. These movies already have their markets but who will tell our own stories if we only look at Hollywood stories,” said Clarisse.

The young Seychellois believes that film festivals are such opportunities that could be tapped into in the future to showcase films from the island nation.

“Some of my colleagues [from New York Film Academy] are doing well in film festivals right now. We should start to think about how we can also make films with the aim of going to film festivals -- after all that’s how people like [Steven] Spielberg came to be discovered.”