A page right out of the Jungle Book – meet the lion, tiger and bear who are all best friends 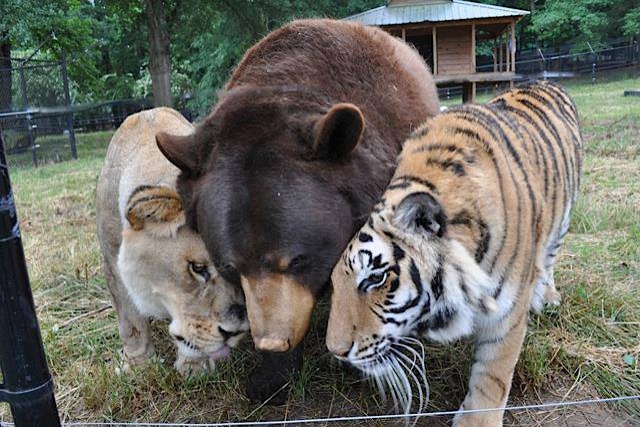 Best of friends: Leo, Baloo and Shere Khan nuzzle up together at their enclosure inside the Noah's Ark Sanctuary in Georgia (Noah's Ark Animal Sanctuary/Facebook)

(Seychelles News Agency) - If a tiger, a lion and a bear were somehow to stumble upon each other in the wild, the three fearsome predators would be natural enemies. But for Baloo the American black bear, Leo the African lion and Shere Khan the Bengal tiger, their traumatic experiences in early life led to a lifelong bond that has led to a one-of-a-kind relationship.

The three animals were found, malnourished and abused, at the home of an American drug dealer when it was raided by police thirteen years ago. An animal sanctuary called Noah’s Ark, a 250-acre sanctuary for abused, unwanted and neglected animals in Georgia, USA,  took the three bedraggled animals in and nurtured them slowly back to health.

When they arrived at the shelter, the cubs displayed the effects of their mistreatment and neglect at the hands of their previous owner, but their handlers soon put them at ease by giving them the treatment and nutrition they needed as well as plenty of love and attention. The trio was soon nicknamed ‘BLT’ by their handlers.

"We could have separated them," Diane Smith, assistant director of the Noah's Ark Zoo said in an interview with UK's, ‘The Telegraph’. "But since they came as a kind of family, the zoo decided to keep them together."

Baloo required greater care than his two buddies – his former owner had put a harness on him, but failed to have it adjusted as the bear grew bigger, leading to his paw becoming deformed and infected. After arriving at the sanctuary, the harness had to be surgically removed.

When Baloo was taken away for surgical treatment, his lion and tiger friends became increasingly agitated until he returned to the enclosure after recuperating from the surgery.

Baloo and Shere Khan are very close friends as they spend most of their day together, playing and grooming each other. As a nocturnal cat, Leo tends to spend most of his day sleeping. According to their handlers, Shere Khan is the most playful of the trio, always jumping on the other two and enticing them to play with him.

The three unique friends were housed in their own custom-built enclosure at the sanctuary about five years ago, which cost more than $25,000 to build. But another challenge was soon to come for the sanctuary when the U.S. government passed new federal regulations requiring big cat enclosures to have 16-foot high fences put up, which would take effect in October 2013.

Baloo, Leo and Shere Khan's fence was only 8 feet high, and rebuilding the fence for their large enclosure would cost a whopping $489,000. If the regulations weren't met, it seemed inevitable that the unthinkable would happen – the three friends would have to be split up and placed in other smaller enclosures.

Desperate for funds and with time running out, the animal sanctuary entered a contest to help raise the money they needed for BLT. On 15 August 2013, an online fundraising site called CrowdRise teamed up with social news platform RYOT to announce a challenge in which the nonprofit organization that could raise the most money in five weeks would win an additional $75,000.

On 10 October it was made official - Noah's Ark Animal Sanctuary had won the #STARTARYOT challenge and even received an extra $10,000 for attracting the most unique visitors during the challenge.

Noah’s Ark was able to raise $362,269 through the crowd-funding appeal, and the fencing company generously agreed to discount the price of the new fence.

The latest threat to the animals’ special friendship was finally over, and the three continue to live and play happily at their special enclosure in their very own version of the Jungle Book.

South African lion to be isolated after killing US tourist